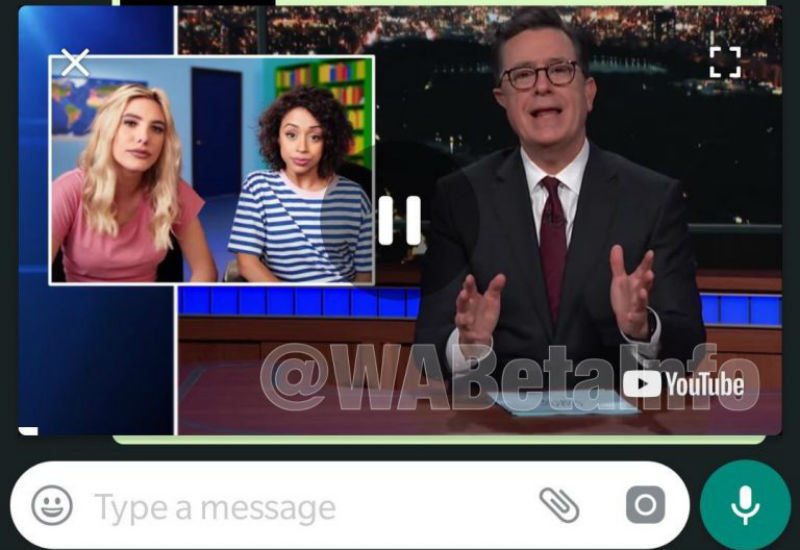 WhatsApp is reportedly working on a picture-in-picture video feature for Android where users will be able to view YouTube and Instagram videos while browsing through their chats. This feature, which is already on iOS back in May, allows users to play videos from YouTube and Instagram in a small window within the chat app itself. You won’t have to leap into YouTube’s or Instagram’s apps to view a clip sent by a contact. but, the outlet added that the coming feature isn’t compatible with Instagram Stories.

According to a report by WABetaInfo, WhatsApp is working on the picture-in-picture mode for videos in the Android app the feature is available in the beta version 2.18.234 of the messaging app, but is currently under development and has not been rolled out for beta testers yet. According to the report, it needs to be developed more before it can be rolled out. The reports also add that WhatsApp has been working for the last few months in order to add this feature and it may be available in one of the next few updates.

When the picture-in-picture feature rolls on to WhatsApp for Android, you will be able to see a White-coloured Play icon on any YouTube or Instagram video link shared on the messaging app. You will see an icon and the video will pop-up in a small box inside the app. This box can be expanded or placed anywhere within the app while, you will be able to continue texting with your contacts.

The video will keep playing till the time you are on WhatsApp. The PIP will come with play/pause, fullscreen and close buttons. The size of the bubble can also be increased and it can be moved around within the chat.

Currently, there is no information on the date of the launch of the new feature but it will not work with Instagram stories. Also, iPhone users already have the feature where they can watch YouTube videos in Picture-in-Picture mode on WhatsApp.This would be the latest feature to come to WhatsApp in 2018, alongside with group calls, suspicious link detection, and more admin controls features

What do you think about the coming update? Let us know in the comments!