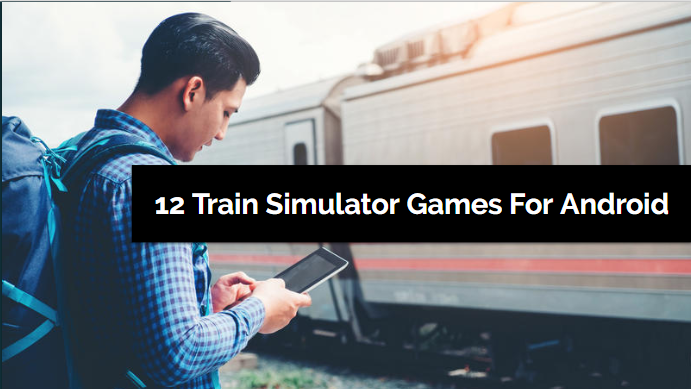 Below, you will see a list of Train Simulator Games For Android which you can pick from. All the games that will be available below are really pretty and fun. So make a selection that is perfect for you.

This is an amazingly constructed simulation game with a realistic train driving simulation and wonderful high-quality environments, the goal of this game is to drive the train to the train station and pick up all available passengers from the station and deliver them to their respective destinations, do ensure to be on time. The gameplay interface is very easy and the graphics are really good.

Play well and hard to unlock new fascinating, faster trains as well as driving routes and detailed environments. In Euro Train Simulator, you not only race against time but also against professional train drivers in an amazing multiplayer mode. Of all Train Simulator Games For Android, Euro Train Simulator is one of the best with just over 10 million downloads on google play store.

Train Sim is a fun Train Simulator Game For Android with over 17 million downloads on google play store, leading as the number one Train Simulator Game. This game is okay for both kids and adults who are in love with Trains and Simulation games as well.

In Train Sim, you can drive the train in an amazing 3D graphics, sit in passenger sits and just view the train and the environments from the ground as the train is in motion or coming towards you. Train Sim offers over 40 different train patterns, including over 50 3D trains with 8 3D environments and 1 3D underground subway route, cool right?

This game is perfect for all Android and tablet users. Feel free to download this game and start playing, it is totally free but contains a few Ads and in-app purchase.

Indian Train Simulator under my list of Train Simulator Games on Android has a better and improved graphics. The gameplay is decent and it features a lot of Indian passengers at the train station. The current version of this game may vary with Android devices because it was last updated on March 17, 2018. So it has been updated to have some amazing interactive element.

Mountain Train Simulator will literally allow you to become an expert train driver. This particular game has an amazingly realistic 3D gameplay and environment and simulation elements. You have the ability to control and drive large trains. Multiple coaches are available to help assist you and bring the fun of train driving for you all.

You can adjust the view of the train your driving and change the camera position or angle. Mountain Train Simulator is completely free to play with several themes, 20 tracks, and 25 new train models. The installation of this game, after you must have downloaded it from the link below, the installation size is roughly 55mb of data and over 100,00 downloads on google play store.

I want to add to this by saying, the first few levels of this game will seem very easy, but as you advance in the game your challenges get tougher.

Convey oil tanks on the train through a railway station to its destination. Take a look at the amazing train models you have, driving not only on the railway but also driving off-road as well.

Oil Train Transport has been updated to contain new trains, environments, coaches and so on. This version 1.6, was updated on February 8, 2018, with over five thousand downloads on Android’s play store.

I can assure you that once you download this game following the link below, you will realize that you haven’t played a Train Simulator Game For Android like this train simulator game.

Dr. Train Driving will teach you how to drive your train as a coach on board. The interface of this game is very simple and very addictive. The controls of Dr. Train Driving is so smooth, it makes it easy for the player to easily maneuver a train. The control buttons are clearly highlighted on the game screen.

The game has several interesting tracks and enormous challenging tasks that might seem impossible to pass, but don’t worry I know you got what it takes. You will be driving the train from one big city to another, picking up passengers as you go. This game is just 45mb of installation size, without any in-app purchase but a few Ads.

This Train Simulator Game for Android is suitable and works on all Android devices. It contains some in-app purchase, but it is not that expensive, also be aware of the pop-ups of Ads, they could get really annoying sometimes. Accelerate the train, reverse and bring the train to a halt. All these features are available in this game and they are working pretty well.

The installation size of the game is just 85mb, so have at least 100mb available for smooth uninterrupted download. The graphics on this game is totally dope, great audio production, and simple controls.

View and drive old historical trains that you thought are out of date, drive and pick up passengers from several train stations to earn points and XP as well as level up. In this game, your primary objective is picking up passengers and dropping them off, but you can also explore the environment as you drive the train.

The game has one of the very best 3D graphics game-play that is very addictive, so I would advise you to play only when your less busy or bored.

Looking to become a legitimate train driver? Super Metro Train Uphill Simulator 3D is the game for you. It is easy to learn and understand, tutorials are made available to guide you through every step of the way. This game is not just for adults but also for children looking to be an expert train driver.

The game features are nothing but outstanding, drive the train around the city, pick up passengers that are available at the train station, drop them off and park the train. You can also drive at night as you do daytime.

In the London Subway City Train Simulator, your main route when driving the train will be through different beautiful subways. You wouldn’t see much of the open road and environments. All your missions and objectives will be played underground but the graphics here is stunning.

Drive the 3D train to the nearest train station and park it, wait for passengers to come on board before driving again. The controls are so easy, it gives you joy playing the game and can also be very addictive. You have several views of the underground subway and several angles to view the train as it’s moving. There is an option to adjust the camera view on the subway, just to keep things interesting.

This game has no in-app purchase and is 5omb in installation size.

Kargo Train Simulator is one impressive Train Simulation Game For Android that allows you to not only drive the train with just passengers but this time around, you drive with cargos. Your objective is plain and simple, drive the train picking up cargo as you go and drop them off before the time given to you to do so expires.

Most of the cargo you will carry is either fragile or expensive so be careful, drive slow and steady in order to drop off your cargo on time and intact. You will be given various amazing locations to drop off your cargo. You also have a 3D graphics of the train with a good audio production of the train. The controls will be highlighted for you to see before you start driving.

It is time to become a Russian expert train driver, test your train driving skills in this Russian Train Simulator. As always the environment will be beautiful and in 3D graphics, so it’s a game worth playing. Drive your train and pick up passengers from the station and drop them at another station.

There is a danger zone, in case your train strays out off the rails, so make sure to adjust and keep your rails in a good condition. This 2018 version is better than most Train Simulator Games For Android on google play store.

Are these actually the best? DEFINITELY YES! Try them out maybe one or two and you might be tempted to download all. I took time to read user reviews, watch videos and also play these games, so? YES! I deem them fit to be the best. At the end of it, all Train Simulator Games For Android are uniquely created 3D games on google play store, with amazing simulation features that you will not see in any other simulation game for Android.