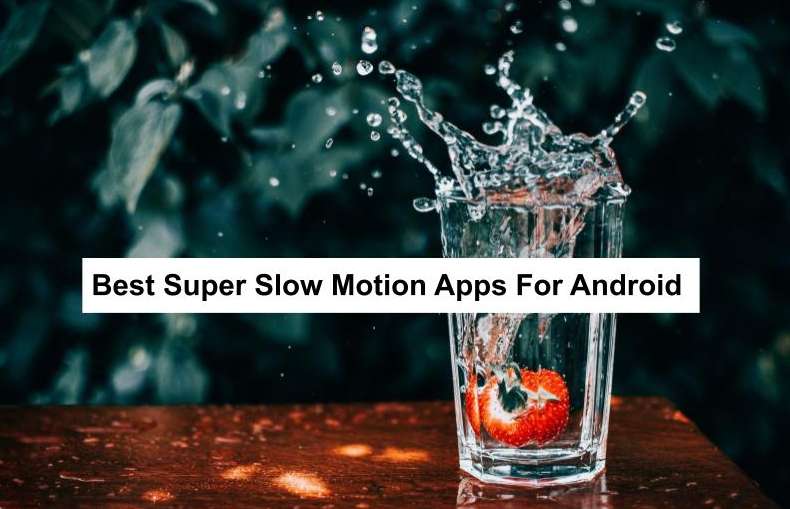 Super slow motion has exploded on the app scene, with both amateurs and professionals using slow-motion recording to better their craft and experiment. If you’ve ever wanted to film in slow motion or wondered what the heck people mean by super slow-mo, you’re going to want to read this article.

The slow motion video recording feature has become very much popular with the new shoot videos. It is fun at a later stage to see how your friends were moving their hands frantically while trying to get done anything fast enough for the normal video.

In this article, you will see my list of 14 best super slow motion apps for Android that you download from Google Play Store. Are you ready? Let’s begin!

Slow motion video editor allows you to create slow motion videos in the app. You can grab videos from your gallery and even select specific parts of the video which you want to slow down! You can also slow down existing videos, trim it, rotate, add music or voiceover, share a story using pictures, and more:) I would highly recommend this as one of the best super slow motion apps for Android.

Efectum offers you a large number of effects and filters that will help you to create beautiful videos. The app has a simple interface, which does not require any additional instructions. It works on all video modes, including shooting. There are also templates for slow motion, fast motion, reverse, timelapse and other effects. In addition, your videos can be edited by hand if you want to make them more personal. Also, you do not need any additional equipment or special skills to work with this application.

Slow Motion Fast Motion Video is a video recording application that lets you slow down or speed up the video. This app can help you record things that happen quickly. For example, a ball was thrown by someone, an airplane flying overhead, or anything else that moves fast. Anything played at normal speed looks very dull. But the same thing when it is played at a slower speed appears interesting. You can also use this app to create your own slow-motion videos. You can do many interesting things with this app.

Ever wanted to create a video in fast or slow motion? Or do you want to change the speed yourself during the video itself? A lot of times when you try this, the overall video quality suffers. But that’s not an issue anymore. Because no matter what type of video you create, Video Speed Changer can take it and adjust all speeds at specific points in time so that your videos are still clear without any blurring. Video Speed Changer is a must download!

Slow Motion Editor is a powerful video editing tool that allows you to easily create slow motion, fast motion, or even reverse video with custom speed. You don’t need any special skills to use The app. Anyone can do it! Just press the Record button, edit your movie and upload it to YouTube or any other platform easily. I highly recommend this app as one of the best super slow motion apps for android. Download it now!

Imagine your favorite music with videos that make it look like you’re on a magic carpet ride through the universe. That’s what Effectrum could do for you. Effectrum, as you might predict, has made video editing fun, or even more fun (funny). It enables you to turn any video into a slow-motion video or even an inverted one. As if that’s not enough, Effectrum also supports uploading videos from your gallery and does not limit the number of videos on your device.

Meet another sweetheart on my list of best super slow motion apps for android. Slow Motion Video Maker is a video app that lets you shoot a video at normal speed and then add amazing effects to it. It is not just a simple slow-motion and fast-motion video maker app like other apps out there. It does not allow you to shoot pictures or live videos, but only HD videos. The stand-out feature of this fun app is the ability to slow an action sequence by slowing it down by 0-8x speed and then instantly turn it into an awesome reverse video by simply reversing the speed.

Slow Motion Video Editor is a first-rate app that you can use to control video speed. The features are simple and easy to use. This makes it the best for users of all ages and professional users alike. It can help you expose more information about a single video without limiting functionality. Whether you’re a moviemaker or you just want to make your video unique Slow Motion Video Editor is your ultimate companion.

This is a great app however, it is still under development. Slow motion video can be a fun way to add a little pizzazz to your vlogs or just make something look more awesome. It’s also a great way to capture movement that normally happens too quickly for us to see. However, the process of capturing slow motion video has always been a hassle because you have to either convert your footage from 30 FPS into another format or use camera slow-motion mode which limits how many slow motion clips you can record over the life of your SD card. But finally, there is an app that bypasses this problem!

Here’s yet another addition to our list of best super slow motion apps for android. Slow-motion videos are becoming a trend among a lot of people. Once they tried this innovative effect from their smartphone they started to look for making slow motion videos online for free.

Slow motion camera app is a fantastic app to edit your videos and give effects for slow motion or fast motion on your videos. If you are looking for the best slow motion video maker app, then this is one of the apps to consider downloading on your android device, this superb and outstanding app allows you to make Slow Motion Videos, Burst Shot videos and Fast Motion Videos. I would highly recommend this app as one of the Best Super Slow Motion Apps For Android.

Creating fast and slow-motion effect video is now easy with Fast & Slow Motion Video App. Did you ever get a video from your friend or relative and wished you could have slowed it down or speed up the playback? This is possible with Fast & Slow Down Video App Android. Using this app, you can make such changes to any video taken from your android device. Using this app is totally free, although it might contain some ads.

Whether you’re into slow motion videos or not – everybody likes to play with them, especially if you have a high-end smartphone. And if you have an Android device – you’re definitely in luck, since the Google Play Store is full of really great super slow motion apps. I hope you enjoyed reading this article, thanks for stopping by!