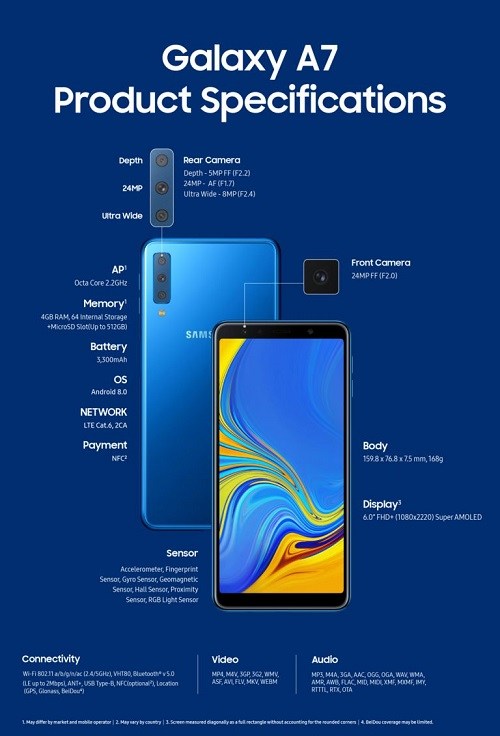 Samsung’s Galaxy A7 with triple-camera

Samsung’s Galaxy A7 with triple-camera

Samsung unveiled its first phone with a triple-lens camera, the 2018 version of the Samsung Galaxy A7. The Smartphone is known as a photography-oriented mid-ranger. It’s got the triple camera setup consists of an 8-megapixel 120-degree ultra wide angle lens, a 24-megapixel main lens, and a 5-megapixel depth lens making a very flexible setup that allows users to take both standard and wide-angle shots, LED flash, Selfie Focus, Pro Lighting Mode, and even allow the user to use the depth sensor for a bokeh effect

One of the features first introduced to the Samsung Galaxy Note 9 gets it way to The Galaxy A7 (2018), Scene Optimizer. This Camera technology update automatically recognizes what the camera is looking at and adjust the camera settings to fix the surround and capable of taking bokeh-effect photos including creating AR Emojis.

The Samsung Galaxy A7, being the first of its kind the company it bags some superb features for a mid-range device. It has a 6-inch AMOLED FHD+ Infinity Display, 4GB or 6GB of RAM, and 64GB or 128GB of storage with a low battery of 3,300mAh, and The phone also has NFC which means services like Samsung Pay a with a fingerprint scanner.

According to Samsung, the Galaxy A7 will be available in select European and Asian markets this fall and that it will be coming to other markets in the future. So expect to see it land in limited some regions in the next few months.

Currently, there is no news regarding the value, but Samsung said it won’t be flagship lineup. It is likely to cost something in the region of $400-$500. Samsung Galaxy A7 is available in four colors: blue, black, gold, and pink.

In conclusion, the device is not the only mid-range phone that we should expect in fall. The company is holding an event on October 11 which rumors has it to be another new Galaxy A series device with four cameras.