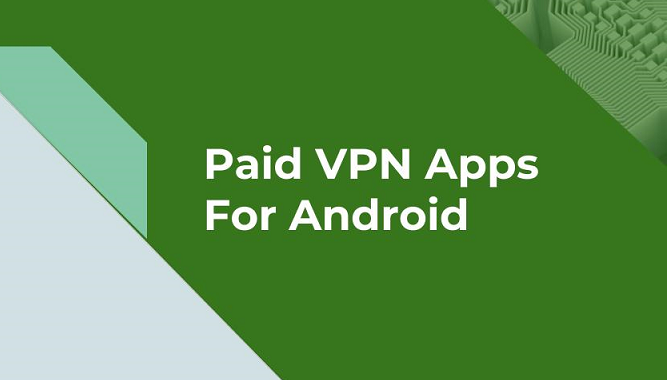 If you’ve been keeping up with this website, you’d have seen a previous post on the Top 7 best free VPN apps for Androids. This post is centered on the best-paid VPN Apps for Android.

Some of us, sometimes tend to go with the saying that the best things in life are free but others don’t. This is because sometimes, the value and worth of a thing are seen through its cost.

However, there is a saying that if you’re not paying for the product, then you are the product so with a paid VPN they do tend to offer more privacy. Should you pay?

It depends on what you use it for but if privacy is a key consideration, then yes. Anytime you log onto public wifi you are at risk of falling victim to cybercrimes or identity theft and a paid VPN is the only way to encrypt your traffic on unsecured networks.

As I may have mentioned in the preceding post, some VPN apps have limited functions due to the “free” nature.

Others, however, let you go all the way and that most times guarantees a better experience where technology and privacy are concerned.

Here are a few VPN apps that make you think of your bank account. Note that while some of them might be are break the bank pricey for you, there shouldn’t be a price on your privacy especially in this day and age.

Seeing as monetary value is something they all have in common, it’s important to point out features to look out for such as a VPN’s client speed, the platforms it has available (server amount), its data use restrictions and its extra features.

The deal with most VPN’s is that they offer the same things so we’ve picked out the best based on cost and online reputation and here they are:

Ever wanted to visit a website only to be kicked out due to blocked IP address or location? UFO VPN can help you access blocked websites in seconds. You don’t have to worry about being exposed, with a secure connection, it is easy to access Geo-blocked content.

Did I mention that UFO VPN has over 2000 servers and around 50 global locations? I mean 2000+ servers is a LOT Of servers. One of the things I love most about the UFO VPN is that it doesn’t take logs. Your privacy is totally secure.

Express VPN is topping review charts as the most user-friendly VPN app out there. This is due to its 24/7 customer support services and 30-day money-back guarantee.

They actually promise to give you back your money with no questions asked, regardless of the plan you subscribe to. On its website, it boasts of a network of over 1700 servers worldwide, unlimited bandwidth and no throttling with users being able to make three connections simultaneously.

It’s easy to use on any device and there are no restrictions on what you can stream or download in private. Most importantly and for the sake of privacy, they keep no usage logs.

It’s as if you were never there.

I had to choose this software as one of our paid VPN Apps for Android.

This VPN stands out because of how cheap it is (in comparison to other VPN apps) with $6.95 monthly or $39.95 yearly. Its efficiency is also solid as it has more than 3000 servers worldwide in two dozen countries, has been noted to be very fast, and comes with its own adblocker.

It, however, doesn’t offer a free trial but offers a 30-day money back guarantee if you’re dissatisfied with any part of the service. As for privacy, it claims not to keep user logs and allows you to fine-tune your own encryption settings (it provides a detailed page showing the options).

Looking for paid VPN Apps for Android that comes with a warranty? Well, here’s one.

NordVPN promises no logs, connection to 6 simultaneous devices, servers in over 61 countries and a 30-day money-back guarantee.

The problem with this app is that its servers can be slow but with a little trial and error, you might be able to find a fast server. It permits torrenting, DNS leak protection and has a user-friendly interface. Finally, its very privacy-focused and accepts bitcoin payments.

That said, in terms of UI, it’s a good catch which makes it a great VPN for androids. With 400 servers in 61 countries, you can be sure to keep your location confidential. It offers unlimited bandwidth and anonymous torrenting, which the average VPN user looks out for. The protocol options available are PPTP, L2TP, OpenVPN, and IPSec.

Android Authority ( describes this as one of the more flashy VPN apps. It comes with the basic features anyone using a VPN app should want. It has a strictly no logging policy and extra features for torrenting (the latter is only available to users of the $6.49 plan).

SurfEasy has an Ad Tracker Blocker algorithm enables them to intercept cookies that advertisers use to follow you online (what a pleasant idea!) and like a neat bow to wrap it all up, you never have to worry about unprotected WiFi networks again.

At $9.99/ month ( or $59.88/ year), you have unlimited data, hidden traffic and location, and a strong AES 256-bit encryption by default, with servers in 20 countries (they say the network is ever-expanding). It is simple to use with an on/off button designed to be so simple “a bear could use it”.

An option to stay connected is available so that it can keep your data secure 24/7 and if your connection is interrupted, it shuts down traffic so nothing gets through accidentally.

With its no-logging policy, you’re sure to remain anonymous and of course, it comes with WiFi security. Who would bother with it if it didn’t?

And there you have it. These are carefully picked best paid VPN Apps for Android devices. I’d really love to hear your feedback after using one or more the Apps listed here.