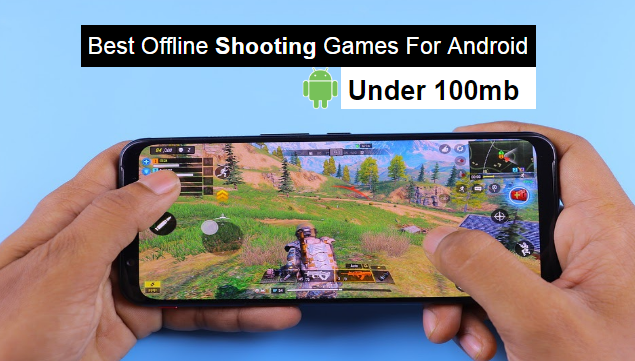 Hey there guys, are you looking for the best offline shooting games under 100mb for Android? then you have come to the right place.

The games that are currently on my list are suitable for all android devices from android 5 to the current Android 10. The games are also under 100mb to enable you to download and play without any fuss.

The graphics and gameplay are up to par with other good graphic games that can go for 500mb and above, that sounds satisfying, right?

That’s the deal, so, let’s get ready to download.

N.O.V.A legacy is one of my personal favorite shooting games, that contains really good graphics and smopoth gameplay.

The game is totally offline, nothing you do in this game will be connected to the internet, totaly free and affordable.

This is yet another entertaining offline shooting game under 100mb, with good graphics and adaptable gameplay. Major GUN is a fine shooting game that is played without the aid of an internet connection

This is a first person shooter game that is wired for your entertainment. There are over 100 tough missons that will gt your glued to your device.

Improve your shooting, play with goegeous-looking guns and kill them all.

Hey there, ever heard of this game? sure you have, if you haven’t, then you just did. This is one of the most populr games on google play store.

One of the reasons why this game is popular and has a high number of downloads is because the game has good graphics, smooth gameplay, no internet connection required, very affordable, and very fun to play.

You don’t that many qualities in just one game, but with this game, you sure do.

This is your all-round best offline, good graphic zombie shooting game for android. This game is worth an applause, so stand up now and tie a hot round of applause, I’m just kidding.

Dead target is a first-person shooter zombie game, with different authentic guns and grenades to kill all zombies coming at you from all angles.

After a series of missions, you will face the big boss head-on or face-to-face and you will have to kill him to proceed to the next set of missions. This game is totally free and available only in offline mode.

This first-person shooter game, like every other FPS game on my list, is just like the previous cover fire games I have above, but this is also, cool, good for you to play whenever your feeling bored and need to pass time.

This game is also quite tough to play, it might look easy and uninteresting, that’s because you haven’t tried the game out yet.

Play for free, and you dont have to worry about internet connection. Totally affordable and satisfying.

Join the SWAT team and eliminate every threat that comes your way. Black ops SWAT is a competitive shooting game that has a lot of missions, and guns and grenades, and all that you need as a black ops soldier.

With amazing gameplay and sweet controls, you can never get tired of playing this game. I’ve been there before, I first saw this game and thought that it might not be worth my time, but after a few minutes playing, I fell in love with the game.

Equip yourself for some offline gun shooting experince.

This is a mega killing game, enter the world of killing enemies like it’s Halloween candy.

It’s killing spree, link up with your squad and join the fight. This game has cool, realistic graphics, and smooth gameplay. Totally a kind of game that I will love to play.

I would really love it if this game was an online game, but fortunately for you, it’s an offline game, so download now and join the killing squad to victory.

Take your time, adjust for the wind, then take your shot. Yeah! I know, I’ve watched one too many army action movies. When it comes to playing games like this, that idea might be important to getting the right shot in this death race.

This is not your regular shooting game, you will be doing all your shooting right from your ride. So get ready and get your ride ready for an entertaining shooting experience.

If you have watched the movie on death race, then you will understand how this game works.

Another game on my list of best offline shooting games under 100mb us Zombie Survival.

Your mission, should you choose to accept it, is to survive the waves of zombies that will attack your fort. Hold it down strong and you will defeat them all.

You have thousands of guns at your disposal, and all that is required from you is your resilience to keep fighting, never give up.

This is one of the best offline zombie games for android, with incredible graphics and cool gameplay that will get your blood boiling.

Yeah! the name is Ramboat, not Ramboo, it ain’t a mistake. This game is a stunning imitation of the amazing Rambo. There is no one that hasn’t watched Rambo if you haven’t then stop whatever you’re about doing and go get the movie

You will be riding on a boat and shooting down our enemies as you move, ain’t that cool? This is another kind of unique offline shooting game under 100mb.

The grphics is cool for the game’s standard, very entertaining, and engaging.

I even get upset when I see this game at 55mb for download size, this game is totally worth more than that, that’s why I also get excited when I’m downloading it. Don’t know if the feeling is mutual, but download this game first and tell me what you think.

This offline shooting game is an improved high-end graphics game with cool gameplay. This should be one of the best action shooting games on google play store.

Become a real-time commando striker, join the strike force, and prove your superiority in an amazing FPS offline shooting game for android.

This game has really cool graphics and amazing gameplay, with good-looking guns and different locations to shoot in and show how good you are in playing FPS games for android.

It’s you and you only that has this covered, this game awaist your presence , don’t hesitate to play this now.

That’s all I have for you today, the top most played, best offline shooting games under 100mb that are totally addictive and fun to play.

Thanks for stopping by, see ya!