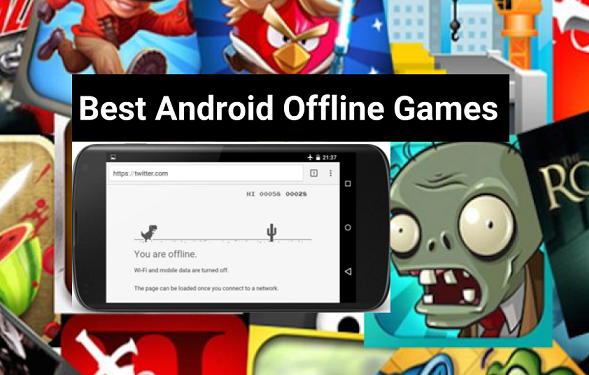 Games are an excellent source of entertainment and one of the best way to kill time and have some fun.

Smartphones have become the perfect companion for game lovers as they can fire up a game anyplace and anytime; well, almost.

There are thousands of Android games on Play Store in almost every category imaginable.

Many games need a strong and stable internet connection to work, which renders them useless where we don’t have any internet access.

Games that need internet connection are sometimes chockful of annoying ads and popups that disturb the overall gaming experience.

When you do not have internet access, and you have some time to kill, your best option is to keep some offline Android games to fall back on.

Our list of 12 Best  Android Offline Games can help you choose an excellent game from various categories that can be played offline anytime, anywhere.

Which are the best offline games for Android? Here is where you can discover all the best games on the Android Play Store that can be played without a network connection.

Badlands 2 is a super successful game on google play store.

It actually won the most beautiful reward of google play store best of 2016, It has a great user interface to improve gaming experience.

Trust me, I’ve played badlands and I’ve found it totally worthy of being on our list of best offline Android games.

Tap Tap Dash is one of the popular arcade offline game for android and it’s quite addictive.

If you’re going to play you will get the goal to finish levels you can play this by a tap on the screen to jump and dodge the obstacles.

The best thing about Tap Tap Dash is that you won’t get bored by playing this amazing game because it has many levels.

Tap Tap Dash has a rating of 4.6 on google play store. You can also activate the multiplayer mode and play this amazing game with your friends.

Have You Played Into The Dead? If you have played subway surfers or other running games and loved them, you’ll love this one too.

Into The Dead 2 is one of the best offline games for android, it has the same concept as other running games.

Into The Dead 2 has a rating of 4.5 on Google play store and crossed more than 70+ million downloads also.

The game is best for zombies games lovers.

Dead Trigger Is yet another Best offline games android which you can consider for zombie game lovers.

Dead Trigger has a rating of 4.6 on google play store.

The Game is for those who are the lovers of shooting games or zombies games, you can give it a try you would love it for sure.

Contract Killer 2 is yet another shooting offline game for Android, Mainly the game comes under action genre and the best part about this game is that you can play without having any internet connection.

The game is all about shooting. If you going to play you will definitely love if you like shooting and actions games. I would definitely recommend this game to you if you love shooting games.

Limbo is a popular offline game for Android that you probably are not aware of.

The story is about a boy who loses his sister in a dark forest and fights his way to get his sister back. The Game has a rating of 4.7 on Google play store.

Limbo would be a great pick if you are looking for adventure.

I can’t list out best offline Android games without including shadow fight 2. It has amazing graphics and visual gameplay.

If you’re looking for an amazing 2d game, then you totally should try this out for sure. The game has the rating of 4.6 on google play store

You’ll be doing a lot of fighting if you eventually download this game.

Cut The Rope 2 is a puzzle game and yet another offline Android game that you are sure to love.

Here’s one of those Offline games for Android that won’t bore you at all. If you are looking for a puzzle game with cool graphics and all, you should try this.

Subway Surfers is a platformer/action game with a mechanic very similar to Temple Run, where you have to flee the police in a dangerous and apparently abandoned train station, with trains passing by at full speed.

You had better be careful!

Unlike Temple Run, in Subway Surfers you do not control your character with the accelerometer. Instead, you have to move your character between three ‘lanes’ by swiping your finger across the screen. Of course, you can jump over obstacles and roll on the ground to dodge. You can also use different gadgets like jetpacks or skateboards to help you in your unending race.

Like you’d expect in this sort of game, you have to complete various missions where you can get coins to buy upgrades.

This is nothing new, but it is still fun.

Tower boxing – a crazy boxer is destroying the skyscraper starting from the bottom floor.

Join him! Choose one of 10 characters and hit the skyscraper. As you destroy the bottom floors the top ones lower.

Set the record and get different achievements in this Android game.

This game simply gives you control of a hungry shark and lets you eat everything in sight.

The idea is to eat nonstop, avoiding bigger predators and harmful objects, thus growing as big as possible and taking on bigger prey.

You’ll not regret downloading this game.

Here goes another cool listing on our list of best offline Android games.

It’s the winter of 1944, Western Front. You and your boys are on guard duty when the enemy decides to throw wave after wave of troops at your position.

You basically need to man the defenses! Recruit and upgrade troops, order tanks into battle and beat the enemy with superior tactics and firepower!

You can also Call in air strikes to gain the upper hand and collect supply crates to boost troop morale! Put the heat on the enemy with your flamethrowers and have your medics tend to your soldiers! Take up the guns and earn your glory!

Download
Conclusion
There you have it. These are official my best picks for Offline Android Games. Now, you can have fun gaming without having to think about purchasing coins, saving game data online or loading game data.
Did we miss any of your favorite Games? Please tell us in the comment section so we can include it on our list of best Offline Android Games.
Thanks for stopping by.
tags: offline android games
previous Top 9 Best Survival Games For Android | [Updated 2021]
next 10 Best Offline Games For Android 2021 | No Internet Required!