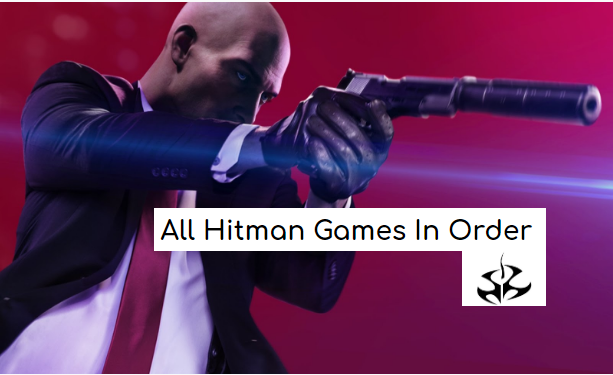 Are you a fan of the Hitman series, I know I am. I literally love Hitman games on PS4 and Xbox consoles. All Hitman games in Order are unique and great to play.

The game challenges you to think, be stealth, and manipulate your surroundings in your favor.

When playing a game like this, you learn to think differently from the convectional shooting spree that we all normally like.

Hitman series Is one of the best and widely played game series, just like Call of duty, Far cry, and other action-packed adventure games that are available.

So together, let’s check out All Hitman games in order.

All Hitman Games In Oder

This is the single, most amazing first Hitman game that was ever made and produced by the prestigious IO Interactive Company. Although the game went public through Eidos Interaction. This game was released on the 21st of November 2000, which was over 20 years ago, and it’s still a great game to play.

This game has good graphics, smooth gameplay, and really cool sound production. Morten Iversen and Peter Gjellerup are the two amazing writers that we have to thank for this particular series coming to life.

The storyline about this game as the human clone code named agent 47, which is the character that you will be having control over, starts from you escaping from a test lab, and go on a killing spree killing targets using stealth and several fighting skill and ammunitions.

Here is the second Hitman game that was ever made, this game can be played on any game console and also on a Microsoft Windows. This game was published by the same company responsible for the first game, same goes for the writers.

This series was released in 2002, two years after the first Hitman series. Just like the first series, you assume the roe and start playing as agent 47. Just for those that like playing multiplayer games, this game is just for one player only.

This s an intense and beautiful game that. The gameplay, graphics and sound production got even better.

Hitman 3 is the bomb, when this series came out in 2004, could not wait to get my hands on it. I remember back then when had a PS2 game console. I played the game morning and night, I was basically addicted.

There are so many weapons at your disposal, your mission, if you choose to accept it, is to eliminate targets all around the continent.

Your targets are the ones with the blood money, your mission s to kill all the criminals and thugs that possess those blood money and eliminate every threat to your own life in the game.

As stated in the previous series, the developers of this game take 2 years before releasing another series to the general public. This game was released on the 26th of May 2006 and has been an amazing game to play ever since.

This particular series took a while but was finally released n 2012. This is one of the toughest and exciting Hitman series ever. The game is hard and that is the truth, but wth your experience playing the earlier series, you shouldn’t have a problem passing all the misions.

It takes patience and wisdom to play this game. You need to be stealth and very precise in your killing. In this game you will have to kill the character’s girlfriend to move on with the mission, if not you will get stuck in that objective to you kill Diana, the girlfriend.

This game is available on Playstation 2, Xbox 360, and on Microsoft Windows.

This is the next official Hitman game. This is a puzzle game, very different from the regukar shooting, klliing and fightiing acton Htman game that you are used to.

Danel Lutz, as the director of ths game made it special. Ths game is avaiable on Microsoft Windows, Ios, inux, Playstaton 4, Playstation Vita, and even on Wndows and Android phones.

Tis game was released to the general public n the year 2015/2016, 2015 release was for os users at first then, lter came out for other platforms.

This is the seventh series released to the world. The graphics is decent enough, the gameplay is great, but to my taste, not as great as the Hitman: Absolution series.

This Hitman game was made to be played on Android and Ios devices, so I’m going to say a big sorry for the Hitman fans out there that were expecting to get this game on their playstation console.

This is a single-player game, collect any weapon that you feel you can use to kill all the criminals that you will be assigned to kill.

In the year 2018, this great game was released and it has been a great game to play for all those that got their hands on it. This smooth game was also developed by IO Interactive, and published by Waner Bros interactive entertanment.

Having seen all Hitman games in order from the very first Hitman ever made to the current one, which would you like to start with. I personally would love to start with the first one and then, follow it up with the next series until I get to the present series.

That would be amazing, won’t you want to give it a try, let us know what you think, drop a comment below if you have any other question and we will attend to them as soon as possible.

Tanks for viewing this post, till next time bye.