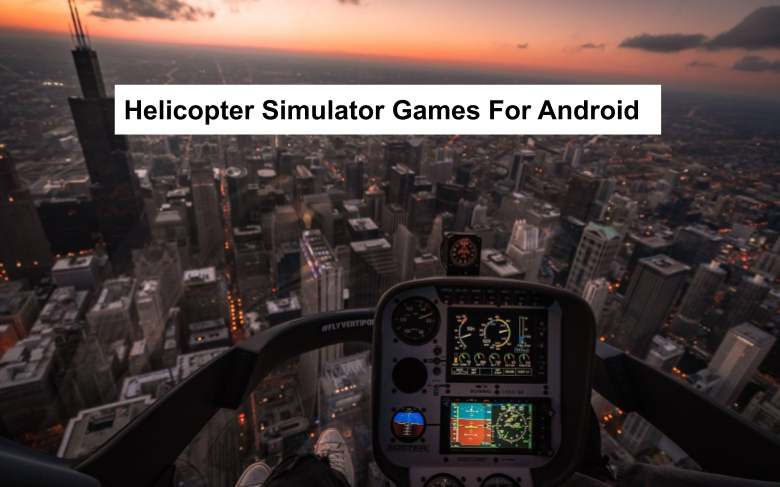 If you haven’t seen the article on best train simulator games for Android you should go check it out now.

Today, I will show you 9 best helicopter simulator games for Android. You can use these games to while away time and have fun.

All the games listed in this article are free, you might see a few ads here and there but there they won’t trouble you that much.

Okay, without further ado. Here’s my epic list of the best helicopter games for Android.

Join the Squadron and launch attacks on deadly threats, in this game you’ll need to guide the helicopter and demolish enemy defenses. There are 5 scenarios in this helicopter simulator game, 30 missions, and over 80 challenges.

There’s also a free fly mode with customizable weather. I must warn you though, you might get addicted to playing this amazing helicopter simulator game.

Ready to rescue folks with a helicopter? Of course, you are. This simulator is amazing, I enjoy my first 30 minutes of gameplay. This game contains 20 free levels. You can choose to be a firefighter, military chopper or the apache chopper that fires rockets.

There are a lot of mission that can be played on this helicopter rescue simulator game. You’ll almost never be bored while playing it.

Want to take the president around? Download this one. It’s fun. In this game your task is to fly and drive the president of the United States around. You also get to drive a limo. You can even choose to become the president yourself or fly big stars on the planet around the city.

There’s also a mode where you get to save the country from a terrorist attack. This game is fun, download and thank me later.

This game almost gives you the exact feel you’d get if you where flying an actual chopper. Simcopter is one of the best helicopter simulator games for Android that I have played. Although I don’t play it anymore, I couldn’t go a day without playing it back in the day.

In this game there are 18 helicopters, 9 different cities and over 300 missions to complete. There’s even day and night mode.

See this as an opportunity to fly the president. Serve your nation as a real patriotic hero by taking president trump from place to place. Sometimes you’ll be required to use a car and other times a chopper.

The controls of this game are really smooth, they are a lot of flight missions to play. You will love this chopper game for Android.

Another simulator worthy of your love is the Helicopter 3D flight simulator. It has easy to use on-screen buttons that enable you to fly the helicopter however you want it. If you have ever played Dr. Driving and loved the experience, you’d also fancy this. They have almost the same kind of controls.

There are over 15 missions to do in this game and a bunch of airports to land or take off.

Meet RC heli sim. The meaning of RC is remote controller. So, this app basically simulates an actual remote control helicopter that you’d get from a toy store or wherever. You should use this RC Heli Sim game before trying out an actual RC helicopter.

This isn’t a game but you’d be controlling RC models just like you would in real time. See this app as a means of learning how to fly an RC helicopter before actually flying one.

With over 50 million downloads, this game surely deserves a medal for being awesome.

Want to be a cop? Now is the time. This simulator game lets you fly a police helicopter. In this game you can play as a firefighter, or do some sky lifting with the super electromagnet.

You don’t just get to fly police choppers only, you can also fly an Apache or Mi-8 and have that military personnel feel. With over 18 missions to play, you’ll almost never get tired of this chopper simulator game.

Simulation games are fun to play if you ask me, I have played some car simulator games, and train simulator games, you can check them out too. From my list of the best helicopter simulator games for Android 2021, I think I will pick GUNSHIP BATTLE: Helicopter 3D because it has so many shades of amazing.

Now it’s your turn, tell me which chopper simulator for Android you think is best.