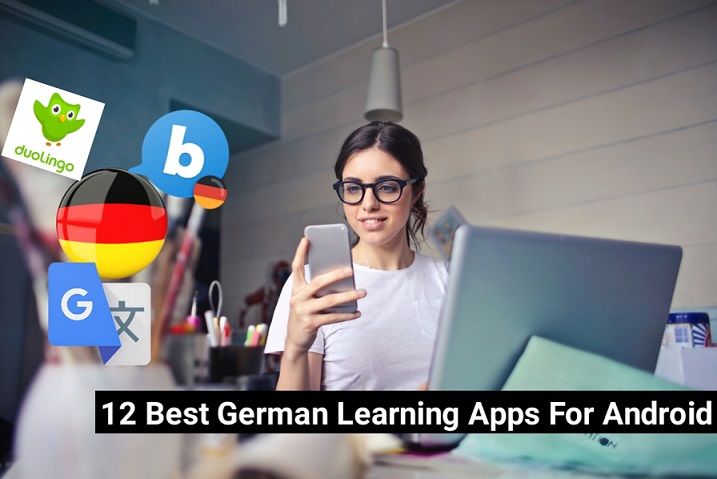 12 German Learning Apps For Android | Learn German In A Giffy

12 German Learning Apps For Android | Learn German In A Giffy

Okay, I am back again with another interesting topic that I guess will be favorable to German language lovers.

Nowadays, most people find it interesting learning other peoples language. I did some research and decided to share some Apps that will teach you how to learn German with the help of an Android App. To be more specific, These apps are for those who wish to learn the German language.

So, this list will basically be about the best German learning Apps for Android.

And hey! If you are from Germany you can also use these apps in order to perfect your vocabulary. So with fewer talks, I will be listing out some best german learning apps for Android below.

The first App on our list is called German Learning.

The name describes it all. This app is an offline application designed specifically for German learning and also to widen your knowledge once it comes to the German language.

Its grouped into different parts which are Verbs, Grammar, and Vocabulary.

The verb page includes all the verbs in the German language which you can click and see more about the verb.

This app is not just an ordinary android app for German learning.

Literally, this app gives you access to lots of videos that could tutor you in the German language. You could find videos that can help you know the verbs and conjugations in german language. This app can build up a beginner to an expert depending on how consistent he or she is.

The most interesting stuff about this app is that it is totally free and also gets updated every day with lots of videos to learn the German language. The third app on our list of best German learning apps is called learn German.

This app can help to nurture you well in the learning of the German language.

It also reminds the user to take five minutes to practice every day, as this will help the app teach you well too.

This App is a secret path to learning the German language from the root, noting all the verbs and grammatical error too. This app also rocks an integrated voice that helps teach you german language, so that you could know what the words sound like.

Trust me when I say that, this app was developed to help teach beginners in a very nice adaptive way too. If you wish to learn German from scratch, then this is the right app for you.

This app was specially made for beginners and people who think the learning German language is pretty hard.

It teaches German without the usage of dry rules or tables of conjugations but it uses every bit of grammar or vocabulary embedded in sentences.

At the very first time of using this app, you will be first thought with simple sentences but with time more complex sentences will be used.

This app has a free version with comes with hundreds of exercises, while the paid version comes with 4000 exercises with 9 hours recordings which makes German learning more simple.

Are you in search of a vocabulary trainer for the German language? This darling is the right choice for you.

This app comes with a flashcard dictionary, that has about 1000 german words and phrases and also translates the German words into English.

It may surprise you to know that this app has been one of the top choices for learning the German language and also the largest growing educational apps for German language learning. It also has two different modes which are the listening mode and the accelerated learning method mode and it runs all this without an internet connection.

This app is very nice to the extent that you could learn German while sleeping.. lol

Do you wish to have a German language learning handbook installed on your smartphone? Then try this app out.

This app has lots of features like learning of the basic and commonly used German words and phrases for beginners and travelers.

The developers of this app made it clear to us that this app was developed to teach phrases because phrases are easier to remember because they have meanings. This app also has other sweet features like saving your favorite sentences or words in order to view them later.

Sure, this app is totally free to use and completely offline too.

Users also said that this app is one of the best German learning apps for android.

This App is a very creative and nice german learning app for Android.

It comes with an integrated chat community where German citizens get to teach non-german the German language.

Though this app has a nice vocabulary development feature, it still helps with the use of the language more often.

The name of the chat community is Busuu community, in this community you can get to submit your practice exercises to the native speakers for proofreading and corrections. With this app all you need to do is set your goals, choose your choice or mode of learning, and learn about 3000 words.

This app has helped millions of people learn german with ease. It has some practice conversation skills which it uses to tutor its users. Babbel Takes you through some lessons which are fun.

These lessons cover a wide range of topics based on trave, culture etc

This app also has a speech recognition technology, that aid in the correction of mistakes made in pronunciation.

This app is generally for beginners and advanced learners too. It is also capable of saving your learning processes on the web.

This app is also one of the best german learning apps for android.

This app is basically for university students as the name implies but that does not mean that any other individual cannot make use of it.

This app contains the 30 alphabets of the German language.

Let’s say for instance you are a stranger in a German school, you can make good use of this app, as it will help you to be better in pronunciation and learning of alphabets.

If you want to be very perfect in speaking and learning the German language, then give this app a try. This app will teach you how to speak German from beginner to intermediate level. It has a very nice flashcard dictionary that contains lots of words and helps to indicate the specific figure of speech.

As we all know, learning by heart is the key to knowing it well, so while using this app, those rule will be applied.

If you wish to learn with speech recognition, it is also very possible.

This App contains all animal names translated from English to German. All this app does is to show you the picture of an animal and pronounce the name in the German language.

This apps requires Google text to speech to enable the pronunciation of words.

If you wish to know the names of animals in German, then give this app a try.

This app does not make use of mp3 files for speech pronunciation.

We have gotten to the last but not the least app on our list of best German learning apps for android.

It was developed for advanced learners in order to help them improve in some parts. This app helps you know the figures of speech in German.

Okay, here’s where I shut down my PC and probably get a cup of coffee.

As usual, if we did not get to include a German learning App that you love, you could tell us about it and we will do well to include it on our list.