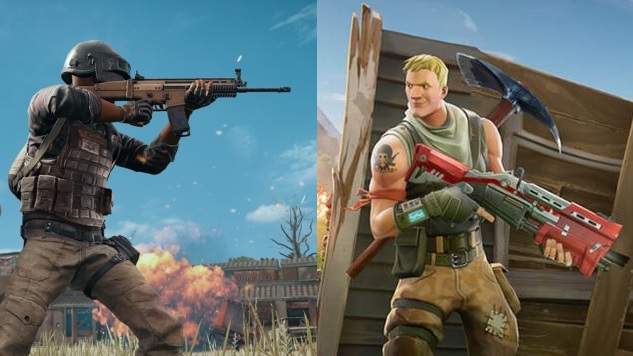 Fornite VS PUBG Review: Graphics, Weapons, Character: Which Is Better!

Fornite VS PUBG Review: Graphics, Weapons, Character: Which Is Better!

Fornite VS PUBG which do you think is better?

Today I’m going to be talking about two popular open world games on the planet currently. I’m not going to go too deep into it.

Let’s start with the origin of the games for beginners.

Fornite is an online survival game launched on 25th July 2017 and designed by Epic Games, the game gives the players a platform to be the ultimate survivor by fighting against other players all around the world.

Fortnite: Save the World,

Fortnite: Save the World

This is a player versus environment mode with four players teaming up to achieve an objective in a mission containing zombies which were caused by a fluke storm which appears all across the earth wiping 98% of the earth’s population. Each player takes a role as the commander of a home-based shelter collecting resources, rescuing survivors and defending equipment which will be used to push back the storm or use to collect data from the storm.

This mode refers to as the survival of the fittest, 100 players are dropped into a zone and players are to kill each other to be the last one standing. players can collect weapons, woods, metals from the zone to help them achieve their goals, the woods and metals are used to help the players build walls, stairs, and barricades. You can play as a squad, duo or go solo.

Fortnite Creative is a sandbox game mode where players are giving the freedom to build anything on the island such as battle arena, race courses and more.

PUBG is an online survival game designed by Tencent Games and released on March 19th, 2018. The game is an open world survival game where players parachute from a plane to a drop point where they compete to be the last man standing. it comes in different mode, you can select from, Duo. Squad or Solo. It’s available to Windows, MacOS, Xbox One, PlayStation 4, IOS devices and Android devices. It contains amazing features like:

High Quality and HD Audio
The game brings an amazing HD graphics to the table with resolution reaching up to 1080 pixels in some android and IOS devices. the HD Audio creates the feeling and experiences of a shoot-out.

Travel in Style
You get to choose the skin of your plane and the parachute used during the game, the plane skin comes in various package located in the store (In-App Purchased).

Team Up with Friends
The game supports online multiplayer, you can add your friends to your squad and play against other squads when playing in squad mode or duo mode.

Now that we got that out of the way, let’s jump into the three most important differences between these two amazing survival games.

I also want to point this out, I’m a big fan of both games and love playing them on my Android device.

Graphics and Display
The two games have amazing graphics ranging from 420pixel to 4k view, playing these game on a console has its own advantage on graphics.

Like the Xbox One when playing Fortnite, it has this glossing look when you play it with a television that does not support 4k while PUBG gave the option to select the type of display you find suitable for your device on Android and IOS devices and an incredible HD graphics on both 4k and non-4k Television.

Weapons and Upgrades
Fortnite took their time and thought about using futuristic weapons, clothes, and drones while PUBG thought about using the present arsenal and personally I think that’s a good idea because we know the capability of the weapons we have presently.

Characters
I’m not going to talk much, the image below tells it all. One looks quite real and another looks like a 3D cartoon image. Which do you prefer? For me, I’d take PUBG.

I guess we all know who got what it takes, FYI We can’t have the perfect game, Although they both have glitches and cheaters, the two companies have been developing updates to kick out those cheaters.

Alright, it’s been a pleasure giving you heads up on Fornite vs PUBG.

Can we maybe create a thread? Which do you think is better and why?

Finding a Cloud Backup Provider with a Solid Reputation