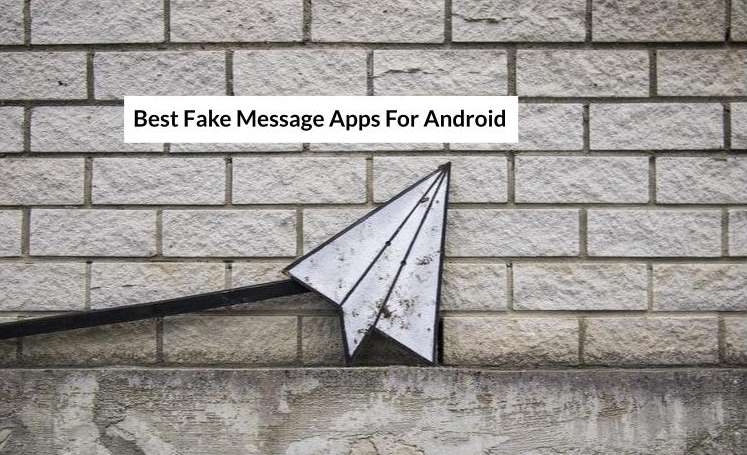 Ever wondered “what are some best fake text messages app for android?” In this article, we have listed 20 amazingly outstanding apps that you should check out.

Technology is changing faster than ever, and it shows in the apps we use on our phones. Fake messaging apps are continuously popping up, and it can be difficult to know which ones are worth using. Here is a list of 20 popular fake messaging apps that can help you find the best way to prank your friends. These are apps that will allow you to pretend you’re texting your friends when you’re really not.

Fake Message Free 2021 is a new app from Woldream that lets you send real-looking text messages for free. It’s similar to the popular Fake SMS app, but with a few differences. First of all, the app allows you to create an unlimited number of fake numbers—as many as you want—and send text messages from any of those numbers. If you are looking for the best fake text message app for Android, you should consider this app.

While there are many Text Message Apps out there, MeMiMessage is one of the best App for Roleplay Fanfiction users. Roleplay Fanfiction is a wildly popular genre of fanfiction that revolves around popular anime or video game characters who act out their lives in fictional worlds. MeMiMessage is a popular fake text app used by authors to communicate and chat with their readers. The app has a few unique features including the ability to message yourself, as well as to send and receive messages from other users.

Ever been in a conversation with someone on a messaging app and wished you could just leave a fake message to see if they’d respond? Fakenger Pro is the perfect app for you. However, you would have to pay a little amount to use this app. It is Ad-free and allows you to create fake conversations and share them with your friends and family. You can use it to prank your friends and family, or you can use it to make fun of celebrities such as Taylor Swift, Katy Perry, or even tech companies, such as Facebook.

Here’s another Fake Text message app for android worthy of note. How do you give your girlfriend or a close male friend the false impression that you are texting a non-existing lover on your phone when actually you are not? Well, a good way is to install this fake SMS app on your phone, It’s a simple trick but can be quite effective in creating the desired impression. I highly recommend this particular app.

Here’s another darling on our list of best fake text messages app! Fake SMS has been around for a while, you probably did not know about it; Fake SMS is an app that helps you receive a fake Text Message From Anyone. If you want to make your friends jealous, and want to prank your lover, or want to laugh at your friends and their silly mistakes, or if you just want to send a fake text message to anyone, it is your chance.

So Facebook Messenger is a great messenger that is used by millions of people all over the world. But do you wish you could create similar fake conversations that look just like those on Facebook messenger? This app is here to help. Your Friends would most definitely fall for this prank. Check out the app on Google Playstore and thank me later.

This app is one of the best for making fake text messages and video calls. How often do you get bored of the default texting app and start looking for new ones? If you are like most people, you have been searching high and low for the one that comes close to how your friends’ text. I am here to tell you that you are looking in the wrong place, as the best app for chatting with your friends and making fake chats is the one that is right in front of you—the one that many of your friends are using.

If you think that a fake call would be fun, the Fake Call and SMS app for Android might be the perfect app for you. This app lets you make calls and send text messages that are fake. You can use this to prank people. It has a large variety of features that include: Customize fake caller information: name, phone number, picture, ringtone, Schedule a fake call at a specific time, Choose fake caller information from your contacts, Customize the time for fake messages, and more.

Fake Chat Conversations is an app that lets people create fake conversations, including chat logs, pictures, videos, and voice notes. The tool allows you to create a fake conversation between two of your friends, whether it’s about a fun date, a business meeting, or some new schadenfreude. The app is not a way to cheat on relationships—you can’t do that—but it could be fun to play with friends or family. It definitely belongs on my list of best fake text messages app.

This is a great paid fake text messages app for Android. With WhatsMock Pro, you can create customized mocks for all your friends and family. You can also create mocks that will automatically mimic the text conversation of your friends and family, without having to type every word yourself. Finally, you can share your mocks with your friends via instant messenger or email, and see how they reply.

I’ve always been a huge fan of pranking my friends and family. I’m not saying it’s funny, what I’m saying is we are all one big, dysfunctional family. How many times have you gotten a prank text from someone and been like, “Wow, they sure have balls to send me that!” I’m talking about the “I’m in a different country and broke, I forgot your birthday” kind of balls. Fake Text message app is one cool android app you can download for prank text messages.

Ever been worried that your partner is cheating on you? Want to test their loyalty? Want to create an entire conversation between you and someone else? Or, perhaps you just want to prank them and install this app on your partner’s Android device. This app allows you to create fake conversations with anyone, anywhere in the world. You can create anything from an intimate chat with your best friend or your lover to a random conversation with your colleague. You can even fake a message from your partner, which will automatically create a chat from their device. This is one of the best fake text messaging apps on Android.

Fake Sms Message is a simple but useful app that will let you send a fake text message to yourself at any time—and once again, it’s a very simple app. In fact, it’s so simple, you might wonder why it’s even an app at all. Regardless, it’s a useful one if you’re looking to prank friends, prank yourself, or have some fun. For all its simplicity, Fake Sms Message still has a few interesting features. It can send multiple fake text messages at once, and if you’re feeling particularly cruel, you can even send your victim a fake text message that says “I’m going to kill myself now.”

Fake SMS is a tweak application that allows you to fake incoming SMS messages, and fool your friends. You can send fake SMS messages to yourself by clicking a few buttons. This is one of the most simple fake text messaging apps for android on Playstore. It is also one of the most download apps, this means people love it.

Fake Messenger is a fun app that lets you create a conversation that looks just like Facebook messenger. You can use it to play pranks on your friends (like getting them to send you a photo of the president without their knowledge), send funny messages to random people, or just have a laugh with your friends or family.

The popularity of WhatsApp is very high and that’s why WhatsApp is duped by many Fake Apps. Fake Whatsapp is one of those Fake Chat Apps which mimic the functioning of the real WhatsApp. You can create fake conversations and messages with your friends and family that seem like the real Whatsapp. This is the last but not the least on our list of best fake text messages app for android.

All the apps listed in this article are pretty much awesome. You just have to browse through, pick one and try it out. If you have or know any cool fake text messages apps for android that we might have missed, tell us in the comment section below and we would add them to our list. Thanks for stopping by, do have a great day or night!