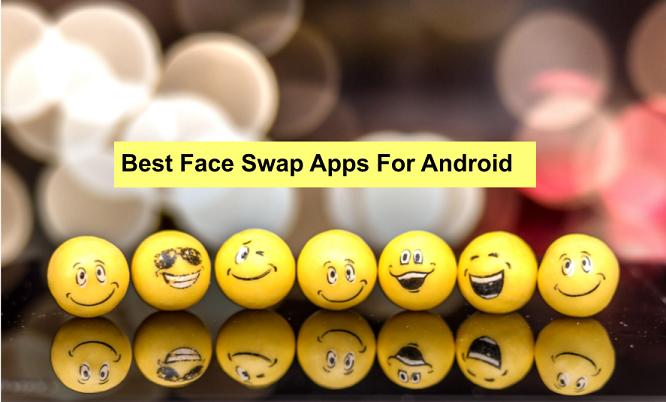 Looking for an App to swap faces from two photos? Well, you landed in the right place.

Changing face in images is one of the most interesting forms of entertainment on smartphones. You get to use the front camera, change faces or even use something else on your face that is completely hilarious and sometimes scary.

It is a mobile craze that goes as far as allowing you to switch faces with even your friends, dogs or anything else you can think of. Whether this trend will last or not is unknown, but in the meantime, to fuel the crazy and fun part of you, here is a list of our top 8 Best Face Swap Apps for Android:

This app has a large repository of celebrity pictures and faces, allowing you to put your face onto a wide range of pictures and vice versa. The app uses advanced face detection technology to make sure the face swap is done perfectly. However, users have to keep in mind that face swap works better under proper lighting and setting. Dimly lit photos make for terrible face swap images. In addition to face swap, the app also lets you place objects on pictures, thus broadening its skill set.

While all the app’s features are free to use, the only difference between the paid and the free version is ads. So if you like using this handy camera app but don’t want to see ads, making an in-app purchase should help.

You probably did not take this app seriously initially because of its developers. The app was created by Weather Radar Forecast, and as you know, face swapping and weather forecasting are not exactly related. But trust me when I say that a trial will convince you.

There is something for everyone aiming to do whatever with the app. Scary images lovers are catered for, cute photos freaks are covered and funny pics addicts are not left out.

It gives you real-time swapping, filters, themes, and even the retouch option to spice whatever you are doing up. When you are finished, you also get to pick a different background if you choose to. Having an average of 50 million downloads should tell you that there is something people get from the app that keeps them coming back.

This app grants you a whole new platform to take makeovers to a new level.

Users also have the opportunity to experiment with lots of stickers. Movie themes, cartoons, popular characters, in-app animals are there to boost your choices or you can decide to use your own.

It also has a variety of special effects like Face Bomb that allows the same face on everyone in the image. You can swap several faces, save and share on social networks.

My list of best face swap Apps for Android cannot be complete without Snapchat. Snapchat is probably the most widely used app that allows users to swap their face with friends with a simple filter.

Since it’s not just a face swap app, using Snapchat will give you access to a ton of other features and even if you don’t want to buy into the platform’s trends, its face filters are actually pretty good.

However, unlike other apps that only offer a face swap filter, using Snapchat’s face swap filter will require you to do some digging. The filter is part of the several offered on the platform, but I can assure you that it’s the best one out there. Not only does it do the job well, but images clicked using the face swap filter on Snapchat can be shared instantly with your friends which is great.

We recently came to know that MSQRD has been acquired by Facebook and it’s great news for all Facebook users because MSQRD is a brilliant app. While MSQRD is not necessarily a face swap app, it brings some hilarious masks to make it up for you.

You can easily become a cute animal, a movie superhero or swap faces with your friends. What’s more, you can broadcast live videos on Facebook while having a mask over your face.

The app also contains a rich filter gallery so you can make each 30-second video you record even more amazing. Besides Facebook you can share the photos and videos you record and edit with MSQRD on any social network you choose.

The process of swapping faces with this cross-platform app developed by Microsoft is automatic, so you just have to snap a quick selfie, find the picture of a celebrity or anyone else you’d like to swap faces with and let the app do the rest for you. \

To make things even better you can swap multiple faces in a single photo.

You can also use face search from the web, take a picture from your camera, or pick a photo from your library, either way, the app gives you a bunch of options to choose your image source. You can tune and enhance your images before posting them onto various social media sites. Naturally, you can also choose to keep the photos private and save it in your image gallery.

Cupace is a great and easy to use photo editor app that includes a handy feature called Paste Face that allows you to take the face of anyone in an image and swap on top of anyone else’ face with ease.

In order to make the process a bit simpler, the app allows you to magnify into the image so that your face cutout is as accurate as possible. Once the face is cropped, it is saved in the application and you can paste it into several images if you wish.

This is the last but definitely not the least on my list of best face swap Apps for Android. This App comes with a wide range of editing options.

There are several popular add-ons/filters available here, while you can manually insert objects into your photo to take control of editing.

For example, you can place dog ears on your photos instead of taking a live photo. There are several cute effects to choose from, which make this more than just a standard face swap app.

It allows you to take pictures using the camera or select an image from the gallery, so the options are endless. Once you have the desired filter/effect, you can save it onto your gallery or share it on social media platforms like Facebook, Instagram, etc, with cropping options available within the app.