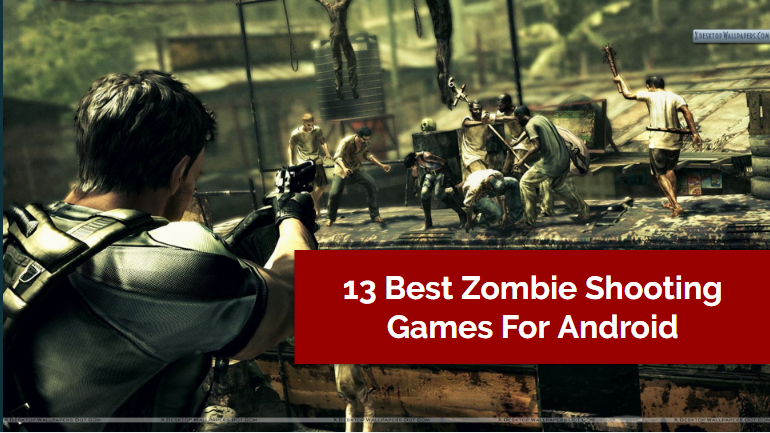 Welcome to another exciting list of Android games that are designed to thrill you. Am here right now with The Best Zombie Games For Android. These list of games are derived from a long list of one of the top-rated, widely downloaded Zombie games out there.

Without a doubt, this list is truly exceptional. So buckle up and get ready to experience a non-stop shooting action experience of Zombie games.

Dead Trigger 2, is one of the oldest FPS and zombie shooting games ever. With amazing graphics, decent gameplay, satisfying controls, and smooth first-person mechanics.

Although there have been newer FPS games out there, this game has had updates added to it to keep it pertinent for lovers of shooting games.

This game as a result of the updates supports hardware controller. The game has tons of missions to keep the fun going and great looking weapons to gather.

Regardless of the frequent pop-ups of in-app purchase that will come up in the games, it doesn’t erase the fact that the game is one of the best zombie game for android users.

I write the description of this game with a smile on my face because this zombie shooting game is one of a kind, unique and amazing. Great impressive and satisfying visuals, smooth controls and a decent audio production.

Into the dead 2 is a new updated version of into the dead 1, with better weapons and tools for destruction and a ton of other challenges and missions to scale through. It has a progressive story mode that will totally keep you glued to your Android device and on the game almost around the clock.

Another feature of this game that is so amazing is the dog companionship, wow I love that feature. The idea that the shooter has a dog companion and other destructive weapons at his disposal is just lovely.
This game is free with a few in-app purchases so feel free to download and join the fun. Dead target is a first-person shooter(FPS) zombie apocalypse survival game. It is indeed an apocalypse, based on the storyline of the game, an accident in a lab created an army of zombies that rampaged the whole city. A veteran was sent to fight off the zombies and control the chaos.

The game has a lot of challenges and missions, and a major mission, the boss mission which every player has to scale through to move further and gain gold bars and money to get weapons to kill stronger, defensive zombies.

The game has a daily spin wheel that offers you the opportunity to earn extra gold and money to keep things interesting. This game is quite difficult as the missions progress, but fear not, you can upgrade weapons that can kill the hard to kill zombies.

With a few in-app purchases, the game has 10 millions+ downloads and and rating 4.5 on google play store.

It offers a better base first-person shooter experience. Most of the features of this game are similar to that of the dead trigger, a lot of missions to pass, in-app purchases and also supports hardware controller. The basic objective is for you the player, to drive any vehicle of your choice, provided you have enough money to purchase them, through an endless road crawling with zombies, trying not to get tipped over by some extremely agile scaring looking zombies.

This version of zombie highway offers better graphics and extra features than the first version. It has also been updated with new vehicles, weapons, and challenges with a leaderboard so that you can keep yourself apprised of your success.

Its a freemium game, with an in-app purchase.

Dead effect 2 is completely a significant zombie shooting game, with a well-set graphics and control feature that enables you to shoot at zombies, monsters and other scientifically enhanced fiction creatures.

A freemium game with in-app purchase, feature to upgrade characters in the game, over 40+ weapons of destruction to use, level ups, contains RPG feature that enables you to upgrade.

Its a really dope game, great gameplay, totally deserves a spot on my list of zombie shooting games for Android.

The walking dead, no man’s land series is a pretty decent game, on the list of popular games on google play store.
One of the unique features of this game is that is its an RPG game and it’s totally free with some beautiful mechanics too.

You also have the capability to collect amazing characters, when you must have earned some credits in the game. the characters you will collect are that of the TV show series. And comics as well.

There are lots of missions and activities in the game, basically because it’s a freemium RPG game. and don’t mind the in-app purchases, its a really entertaining game.

Zombie Gunship Survival has some new mechanics that are new to the zombie gunship series.

The gameplay of this game is really good, am just in love with it. You can actually build your own base and from your base, deploy troops that will kill a whole lot of zombies.

The game is pretty unique with decent graphics, soft controls.
this game is totally free with a few in-app purchases, so get ready to experience some gunship survival.

Zombie combat deserves to be this list because it was rated one of the best zombie shooting game in 2015 and it has really been amazing since then.

Let’s start with the gameplay; amazing. The controls; dope. Mechanics; great. Gaming experience of the game will keep you glued to your Android device.

Its a freemium game, with in-app purchases.

Am going to start by saying, zombie assault is a freemium game and its crawling with a lot of annoying pop-up ads but an in-app purchase.

One of the amazing features of zombie shooting games are the weapons and this game has a lot of cool weapons to choose from, lovers of shooting games will totally fall in love with this game.

I won’t even go deep into the graphics and the rest of the kinds of stuff of the game because it’s just amazingly outstanding.

What you need to do is get your Android device and follow the link below and download the game. And I can assure you that you won’t regret it.

I’m just gonna to keep going with this list because the zombie shooting games out here are simply amazing, great graphics with very sluggish controls, but with that, it’s still an amazing game and it totally has to be on my list of Best Zombie Games For Android.

You have a ton of missions to complete and challenges to scale through and a lot of weapons to upgrade.

This game is a shooter game, probably one of the best shooter games on android google play store, with really decent visuals and cool gameplay.

The game has a lot of missions, 46 in number and 4 different difficulty modes, a lot of upgrades, different creatures, and boss missions.

A whole lot of weapons to kill as many zombies as you please and really heavy vehicles you’ll use to crush through zombies.

It has a really high replay-ability that enables you to go back and forth each mission to earn more cash and literally increase your score.

This game is a freemium game like most other zombie shooting games on my list of Best Zombie Games For Android, with in-app purchase. Gamers should be getting used to this in-app purchase thing.

The gameplay is quite overly simple, but the game is really cool and easy to control and learn. Your objective is to move around your city or wherever, killing all the zombies popping out from everywhere and surviving their attacks.

You have varieties of weapons to choose from. In addition, you must have a really quality android phone with a reasonable amount of memory space on your device and a solid CPU, because the game is really hot to handle.

Thanks for stopping by. I hope you find exactly what you are looking for, but if you want my honest opinion I would advise you first try out the very first game.

All the games on my list Of Zombie Games For Android above are free and may vary in installation size, but none of the games above exceed 200 megabytes, you have some for 100+ megabyte.

Alright, viewers, that will be all for now and I hope to interest you with another article next time, but for now, by adios.