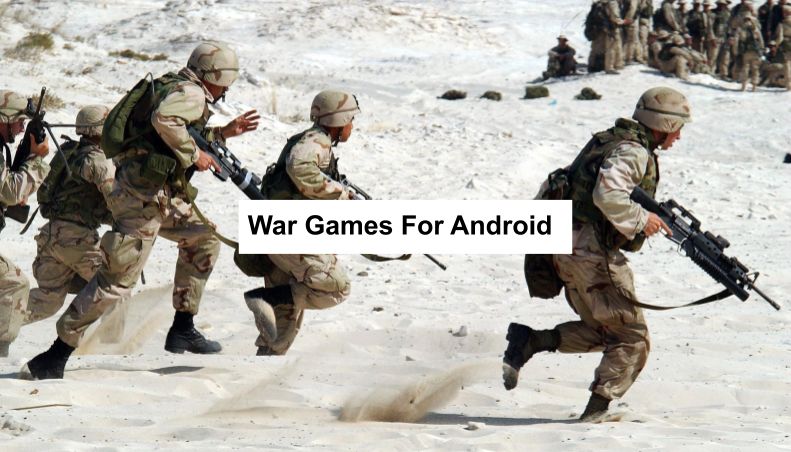 Hey there gamers, ready for some war gaming action?

Who says you need a console to have some war gaming fun? With your Android device and from the comfort of your bed, you can have fun playing war games for Android.

In this article, I have listed the best war games for Android 2021. These games would literally keep you glued to your screens.

I must warn you though, some of these games are very addictive, once you start playing them you might never want to stop.

Alright, here goes my list of the best war games for Android 2021.

The first game on my list is WW2. If you have never played a world war game, you need to go on your knees and ask for forgiveness. World War 2 is one of the best war games I have ever played on PS4. This game brings to life what happens in an actual battle field.

Get ready because things are going to get intense, if you are shot once or twice you’d be dead. Be sure to take cover where necessary, it’s very important. unless you want to respawn over and over again. There are a lot of game modes, and weapons that make this game outstanding.

Take a deep breath and prepare yourself, because, sh*ts about to get real. This is not a drill guys, I repeat, this is not a drill. Warface is one of the toughest warfare games for Android. In this game, your duty is to shoot bad guys and try hard not to die.

Are you into PvP action? This game has got you covered. This is not one of those games that you get to shoot randomly. If you do not carefully strategize your next move, you’d be dead before dawn.

What comes to mind when you hear the word “war”? For me, I think of terrorist. In this game, your task is to take down a bunch of terrorist on your own or with your friends. This game has easy to use controls and won’t take up too much space on your android device.

You can also play team vs team mode which allows you to create a connection and battle it out with your friends. There are lots of locations to play in and also lots of cool weapons to choose from.

Back in the day, when we didn’t have Android phones, Gameloft provided us with some of the best war games for mobile. Symbian Games like brothers in arms will always have it’s special spot in my heart. World at Arms is yet another cool war game for Android that you can use to kill boredom.

In this game you are to defend your base, attack enemy bases and do much more than you can ever imagine. This game has over 10 millions downloads from Google play store, I’m sure you’d want to join in on the fun.

My little brother can literally spend hours on this particular game, even with a PS4 console at home. This game is quite fun and addictive. In this game your task is to control your army to war. Trust me, they will be lots of battles, it can only get harder as you progress, so, be prepared.

The scary part is when you have to battle with the gigantic stick monsters, there are difficult to defeat but not impossible, with the right tactics you’d bring any enemy down. Download this stick war game for Android and thank me later.

How will it feel to have a war game for Android that lets you create your own custom rules? Cool right? Well, that’s what this game does. It actually has a mode that lets you set custom game rules. If you like weapons, get ready to see a lot, there are over 40 different weapons to choose from in this war game on Android.

Your Android device might not be strong enough to play the game? Not to worry, this game can be optimized for weaker devices. I like the deathmatch mode too, in this mode, it is every man for himself. The deathmatch mode is the perfect place to show your skills.

Yes, it still exists. This was my favorite game to play on my symbian device back in the day. Big thanks to Gameloft for creating this game back in the day and also making it available for download in our today world. This game for Android has it all. From the best realistic looking weapons to different locations where you can show off your shooting skills.

Brothers in Arms is undeniably one of the best war games for Android. There are also weather and time-of-day variations, how cool is that. If you are looking for some war action this game is a great option.

Here is another one you would like if you are into world war kind of games. This game has over 500 thousand downloads from play store, this basically tells us that a lot of people have played this game and referred people who have referred people and blah blah blah.

In order to be a master of this game you need to be a sharp thinking and know how to strategize. Don’t be scared, it is not one of those games that are difficult to play. You will enjoy playing it.

I present to you one of the best tank war games. This game is very addictive, while testing it out, I could not stop playing, it was from mission to mission. There are lots of modes in this war game for Android that you would like. For example, the online mode that lets you team up with folks and defend your nation.

You can upgrade your tank whenever you want. This isn’t one of those war games with a complicated menu or shooting buttons, all you would need to do to bring down an enemy tank is to target and fire.

This particular one should bring back cool memories of the toys you probably had while you where a kid. This game is one of the best war games you can play on your Android device. The graphics are cool if you ask me. Although the game has some in-app purchases that some user have found annoying. It is still a great game.

Build your army and get into battle with this game. Download and thanks me later.

Like they say “Every good thing must come to an end” We have come to the end of this article on the best war games for Android. I hope you are able to find the perfect war game that you can use to kill time or boredom.

Thanks for stopping by. Please, don’t leave without clicking on the share button.