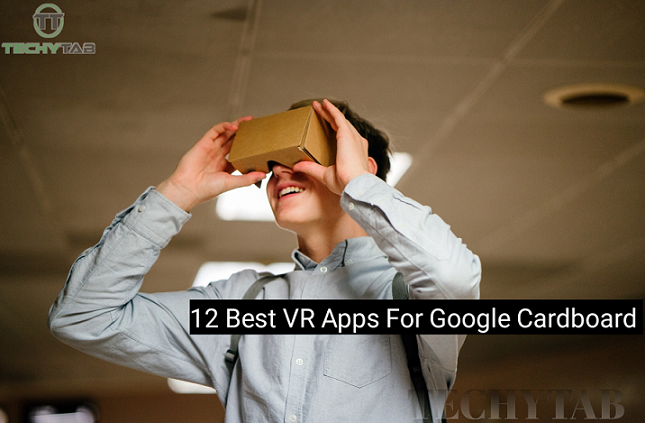 Basically, almost all smartphone users may have an idea of what VR means and what it is used for, and for those who do not know about it.

VR is also known as virtual reality. It is simply known as an interactive computer generated within a particular environment.

It joins them together in order to create a worthwhile experience that is lovable and impossible in physical reality.

What Is Google Cardboard?

This is a straightforward VR headset that works with numerous cell phones.

There are many VR apps for android that you can use to make VR more fun.

I will be listing out some VR apps for android that could be used to make VIRTUAL REALITY more fun.

One of the demo videos is called google earth, Which you use to fly where your fancy takes you.

It also allows you to view videos and some VR content stored on your device.

Here is another app with much sauce. AAA VR Cinema is a VR video player that allows you to play locally stored contents.

It also supports a 180 degree and 360-degree view, head tracking and so much more.

This app is totally free and it is a must that you will have google cardboard.

The title of this app says it all.

It shows you the virtual simulation of moon landing or should I say, how landing on the moon feels.

With this app, you will be able to see what the moon looks like without going there, it shows you all the view and parts of the moon. Literally, everyone who has used this app enjoys it.

The only problem here is that in order for you to enjoy the app, you must have a very powerful and modern smartphone to use this app at full resolution.

Here is another app for google cardboard. Luckily, this app makes it possible for you to take a picture with VR focus and 3D mode.

It does not require any google sign in authentication to use it. All you have to do is download, install it, open and use it.

It takes time to know how to use this app but gradually you will get used to it and also know how to take amazing photos with it. Obviously, this app is very easy to use and completely free to use.

Fulldive is not just an android app for google cardboard but it is an app for daydream headsets.

This app can also serve as a navigation platform for virtual reality and also a social platform that allows you to comment, react and so on.

It has over one million videos and over 500 games in there VR Market.

I strongly believe that most people will love to see what space looks like, well you can. Only if you have this app and also a google cardboard VR.

You can even get to compare the sizes of each planet and learn more about the planet bodies with ease. It also has a voice narrator that helps explain everything to you. This app is totally free but if you want the voice narration you have to purchase it from DLC.

One more thing, this app requires a modern phone, that has a  neon CPU extension which most modern smartphones have.

VLC for Android is a very popular video player for android.

It is totally free to use.

If you are a smartphone user and you have not heard about the youtube app, you should probably get rid of your device.

Youtube is a popular video streaming app and also one of the biggest sources of VR contents on the internet.

I strongly assure you that this app can provide you with tons of videos whether educational or non-educational.

Users are able to get everything for free, but if you wish to get more features like background play, you will have to download the other app called YOUTUBE RED for more.

Google street view is quite easy to use and has always been a helping hand to the google map app. It provides users with 360-degree views of some roads, locations, landmarks etc.

You can also use this app to view other stuff.

In addition, you can also get to see what other users post and what they are up to. It is one of the best VR apps for android and also a very nice app to use in exploring the world from your smartphone via VR.

I know most people don’t know how to swim, well it may interest you to know that you can get to see what underwater looks like with the sweet app.

With this app, there is no need for you to go for diving lessons. You can enjoy this app without the use of a gyroscope.

Have you ever dreamt of taking a tour around  Space or international space station?

Well if you have been dreaming about taking a trip to space, then you are quite lucky if you have a google cardboard VR and this app too.

This app gives you the opportunity to see what space looks like and also allows you to control your gaze direction and a slight head rotation too.

If you want to have a nice and mind-blowing experience, then you need to have a powerful smartphone and this app too. We have gotten to the last app on the list, this app allows you to enjoy your favorite 360º videos from Youtube.

While using this app you will find yourself in a scene where u can look around you as if its real. This app gives you a great and splendid experience you are sure to love.

It has a gyroscope mode which is super cool and also a touch mode which allows you to touch anything you view through the app.

Trust me when I tell you this app is worth it.

We have finally reached the end of this topic. Would you want to know my personal favorite VR App for android? Well, it’s YOUTUBE. Why? Youtube is where you can find tons of cool VR videos.

So, there you go. You know my best. I want to know yours too. And Hey! If your best is not on the list you can comment and we will include it immediately.

Much love from us.