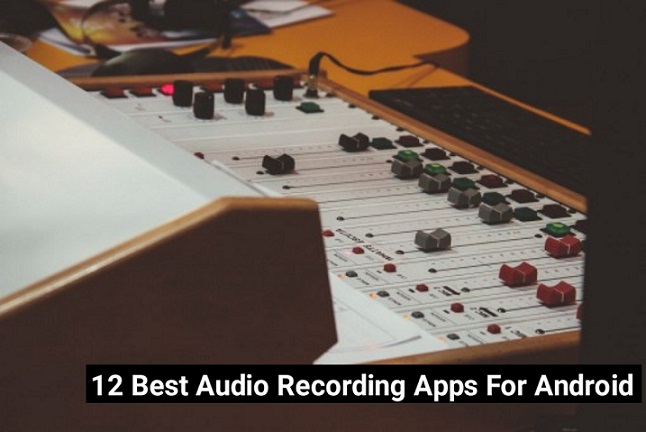 It’s a fresh day and it’s the best moment to unleash goodies to my esteemed readers. Trust me like you do, its another cool alternative to your stock audio/voice recorder.

I do listen to music so much but I haven’t told you how much I love recording audio via my device, thanks to its noise cancellation mechanism.

If you do like recording audio on your Android, it’s mostly via the built-in app. It’s cool but, you are not sipping deep into all that your sweet Android has to offer. It’s just full of potential.

So, save your next audio/voice recording until you pick one from my well-prepared list of best audio recorders for Android you really should not and will not skip.

Let us get to business, below I have made a compiled list of Best Voice Recorder Apps For Android.

BandLab is simply one of the Best Voice Recorder Apps For Android that has about 4.3 rating review on the google play store.

This app has lots of nice features like having a 12 track mixer, lots of audio samples, a guitar tuner, and the ability to record whatever you wish to record.

BandLab is basically for artists or whole band musicians set up. If you are in search of a way to make nice music by mixing some cool sounds together, then this is the right choice for that.

Here is another app on my list of best Voice Recorder Apps For Android, this app is not just an audio recorder but it is a music creation tool.

This app is familiar with some music creation tools like mastering tools, synths, and, recording tools.

If you are a single artist and you eventually want to make up some sounds, then this app will do all you want. This app is very fast with song making and vocal or audio recording.

It supports automation in using most tools and it is not that familiar with the DAW style but it rocks the electronica style of music better.

Fl studio is similar to caustic 3 because it has the same style of music creation tool caustic 3 has.

To be straight, this app has lots of tools like;

This app also allows plugin support and it is not for simple voice recording, but basically for professionals and it is also paid for.

Music creation is quite easy with this app.

It’s can be used for sound recording and mixing.

It has lots of music-making features that are very nice and you can use it to record sound and vocals of any type too.

You can easily compose music by combining samples from different music genres.

You can access thousands of studio loops, also creativity is more easy with the controls in the app, as you can adjust tempo and harmonies, edit song parts and play with spectacular real-time effects.

This app is totally free to use but there are some in-app purchases like plugins that you might need to spice up your works.

The name of this app will definitely tell you all about it. This app is simply easy to use, just click the record button and record anything you wish to.

The easy voice recorder app can be used by students to record lectures, for business and musicians, and literally everyone.

You can use a light or dark theme if you wish to. To round it up, this app also has a pro version that you can purchase at a nice price.

The pro version has some awesome features which include; Ability to record with a Bluetooth microphone, uploading of your recording on the google drive,  MP3 support and so much more.

Do you wish you to take your voice recording skill to another level, then this is a chance for you to do that.

This app is loaded with lots of customization options and it can be used in academic and business sections.

It supports mp3 and that makes it cool to be used for musical ideas too. The app also features an automatic wifi transfer to Dropbox and google drive in order to keep your recordings stored safely.

There is a free and premium version for this app.

The premium version is not too costly but has lots of extra features.

Walk band is not really an audio recording app. This app is mainly for instruments, it has lots of simulated instruments for music creation.

It supports the use of midi controllers for music recording.

There are lots of instruments in this app and can also be used to merge different tracks of the same instrument to one. You can use an external midi keyboard through the use of USB OTG.

Lastly, this is one of the best musical instrument apps for android and it is definitely not that easy to use.

Are you in search of a nice voice recorder or music recorder that is better than your stock recorder? then let’s check this app out.

This app gives your recorder app some sauce which includes; high-quality recording, a nice user interface that seems friendly, conversion of your voice records to on-screen text and so much more.

Giving this app a try is not a bad choice to make, but once you have made the choice, you won’t regret.

The app is free to use, but if you are still in search of more features. Then get the pro version.

This voice recorder app is totally free to use and it is one of the Best Voice Recorder Apps For Android.

It is pretty loaded with lots of features which include; Recording of voice with high quality, simple user interface, some supported operations, accepts mp3 formats, record in background and microphone gain calibration tool and so much more.

This app can be used for occasional ideas, lectures, and also to record some basic stuff.

The free version has Ads while the pro is Ad-free and getting the pro version is not expensive.

This is another best audio recording app for android that requires creativity to perform a lot.

It has some useful features which are nice like skipping noise in a voice record and only get to listen to the part with no noise. It also supports external sd card, background recording and so much more.

The free version of this app is Ad-supported while the premium version is not Ad-supported.

Store your voice recordings as voice memos, and allow you to share them with your friends.

You can also use an external storage device to save your files too and also access some sound from the external device if you wish.

This app records in two types of formats they include; mp3 format and WAV format. You can access this app quickly due to its simple user interface.

This app is fully loaded with lots of features and beautifully designed for audio recording on android devices.

The last app on our list of Best Voice Recorder Apps For Android is known as the voice recorder app.

From the name, I am sure you will have an idea of what this app was designed for.

As said this app is one of the best because you can use it for sound recording, speech recording, music recording,  and also to record lectures in a class.

This app is also features loaded and the features are pretty nice ones too, They include stuff like; storing and sending of your works with friends, microphone gain calibration tool, and mp3 encoding with adjustable sample rate.

We have finally reached the conclusion of the Best Voice Recorder Apps For Android, my personal best audio recording app is the music maker jam.

I chose that app because it does all that is required of an audio recorder.