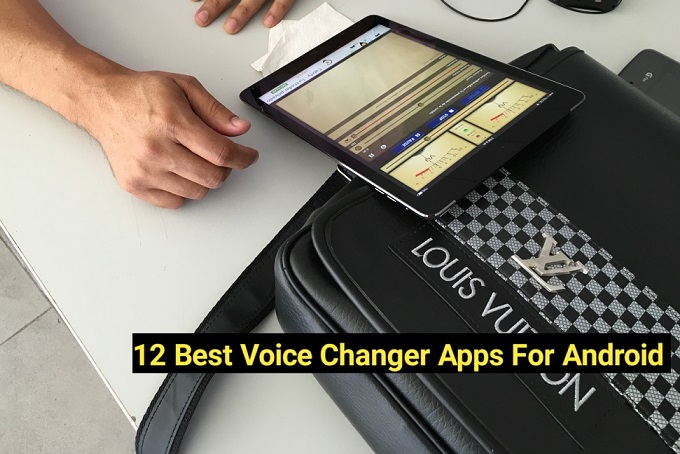 With improved technology going on daily, Lots of new apps are being developed.

In this article, I’ll be discussing some of the best and coolest voice changer apps for android.

Voice changer app is a good entertainment app and can change your identity by changing your voice, you can use it to prank your friends without them knowing it’s you and also change your recorded voice into several voices.

This app is one of the best apps that can help you to play pranks with your friends.

It also has positive user ratings. With this app, you change your voice and have fun to listen to your modified voice and easily record your voice, apply effects, and share them with your friends.

You can also get to do some other stuff like converting written text to voice notes, Save recording, importation of pre-recorded sounds and direct share to various social media.

This app is very pretty cool to use and has a very nice UI.

This app lets you record your voice and transform them into something funny with the use of voice effects.

With this app, you can record or select an existing file and convert them into something funny or your voice.

There are lots of effects to be used in this app and it is also able to share to various social media.

This app is very easy to use and has a clean and straight user interface.

This app is one of the best voice changer apps for android although it is partially old.

It is able to apply popular effects like chipmunk voice effects, helium effect etc. on your voice records.

Perhaps this app also uses the reverse feature and allows you to share your works with your friends and family.

It uses the fmod voice changer engine which is very nice.

You will also be able to use lots of effects from the fmod voice changer engine which is cool.

This app has a very nice yellow looking user interface which is favorable to those who yellow is their best color.

This app is basically an image messaging media service, which allows you to use various face filters and voice effects.

It can also change your looks, your environment, and voice.

Also, it features a backup feature called snapchat memories that lets you backup your snaps to prevent loss of data.

From research, this app is massive in battery draining but as people said ” the iOS version is better” Which is true.

It’s totally free to use but displays ads.

You should really try it out ☺.

This app is an average voice tweaker.

It supports lots of voice effects like a chipmunk, horse, bee, an old man and so on.

It also supports the recording of voice and importation of already existing files and allows you to apply effects on them.

This app is simple to use and can also generate awesome effects.

Voice Changer by AndroidRock is totally free to use and has no in-app purchase.

But it displays little ads but the ads are not persuasive.

Without explanation, you should know that this app is a voice changer for kids but aside from that, an individual can also use it.

This app is packed up with three dozens of effects including all popular ones and other ones you find in other voice changer Apps for Android.

This app is easy to use because of the UI  which is very simple to interact with.

It also has a nice material design which is very much easier to use.

The app is not for free, but you can try the free version before purchasing the paid one, which is not expensive.

Change My Voice is a voice changer application that changes your voice beyond imagination with the use of some effects.

You can record your voice and use some tools in this app to tweak your voice.

You can choose to tweak your voice manually or automatically, you can tweak it automatically by selecting already made presets.

It also allows you to listen to your voice records while making the adjustments.

This app is totally free to use and has no ads.

This app is not only a voice changer application but it also records your calls and changes your voice in calls.

It is completely free to use and totally understandable due to the simple and nice user interface it has.

At least with this app,  you will be able to prank your coworkers and friends on calls with a voice that’s not yours.

Best Voice Changer Developed by xApps will comfort you with the ability to change your voice beyond recognition.

This app can be used for purposes like pranking your friends or fooling someone.

The functionality of this app is pretty easy, all you have to do is open the app and press record button, record what you wish to and tweak your voice to your taste.

This app is not able to change your voice for the call but it will impress you with its unique capabilities.

It is totally and completely free to use with no ads.

Do you want to turn your voice to sound like a robot’s own or sound like birds own? This application will help you accomplish that.

To accomplish that is easy with this app, all you have to do is record your voice through the app and choose which effects you want to use on your voice.

You can also use a text to voice feature, which can be used by writing your text, choose a voice effect and you are done.

This app also features lots of voice effects and it is totally free to use.

This app is an Android application that gives you the ability to record your voice and apply effects to them.

You can also use it to record important notes, lecture notes etc.

This app has no time limits for recording and it is completely free to use with no ads.

you gotta give it a try.