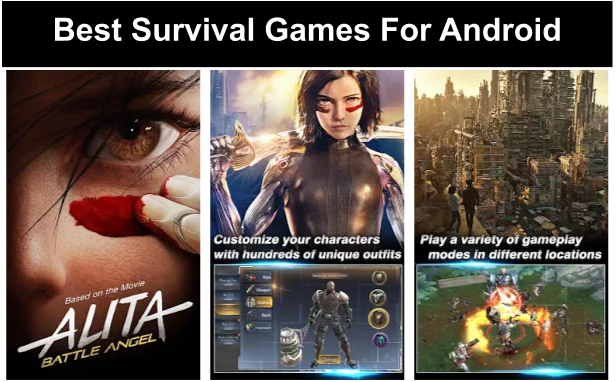 Survival games are fun to play and very addictive, though they are usually heavyweight and that is necessary due to the HD graphics and functional gameplay with various features. They are available in PvP and PvE modes.

Belt up as we make a list of the best survival games for android mobile devices.

In this game, you have to avoid a zombie attack on your yard with the help of powerful plants.

You will have to frequently tender to your plants to prevent the zombies from getting close to your home. The objectivity is simple yet fun to play and very much addictive.

• Over 49 zombie-zapping plants like peashooters, wall-nuts, cherry bombs and more

• 29 different zombies for you to conquer

This is a strategy game. You wage war on other empires and your end goal is to conquer them all and take over the throne.

Each lord seeks power and are ready to shatter the peace that once reigned. They are as strong and equipped as you are. Countless monsters have also risen to wreak havoc across the battlefield.

• This game requires both offense and defense tactics

• Establish your empire on new lands

• Choose between fighting or trading

This game was a huge success on PC and now it’s available on android and faring well. The game requires payment before you can access it version.

Explore various worlds and build yourself a simple wooden home or a castle.

• Marketplace are available to get unique maps, skins, and texture packs from your favorite creators.

• Tweak your gameplay by changing the time of day, you can give items away, summon mobs and more.

The last shelter is a game requiring you to build a shelter to protect you from zombies as the last remaining shelter is about to crumble.

Your goal is to build a new shelter so you can survive. You’re the Commander and you need to protect you people.

This game is a multiplayer strategy game.

• Build a city with structure plans

• Build an alliance with friends

• Choose from 3 class to help you prosper

This is one of the hottest multiplayer game this year.

It features 3D interactive strategy. You get to build your naval base and lead your fleet into countless epic sea battles. Form alliances with friends and build an empire together. Pirates, sea monsters, and players from around the globe are all trying to conquer you. Fight hard and fight well to destroy them.

Strategies matters in this game.

• Over 100 kinds of carriers around the world

• Over 200 advanced helicopters, fighters, and bombers

• Each destroyer, cruiser, and battleship has its performance level.

• You can enhance your carriers, helicopters, cruisers and so on.

This a multiplayer survival game which you can play with 6 players for the online version and 12 on WiFi.

You get to train with your Sarge and sharpen your skills in offline Training, Co-op and Survival modes.  Numerous weapons are available like the sniper, shotgun and flamethrower.

This game is based on the original stickman shooter Doodle Army.

Your goal is to build your village and train your troops for the battle coming your way. Raise your clan, and compete in epic clan wars

• Defend your village with well thought out strategies.

• Fight against the Goblin King in a campaign through the realm.

• Use magic spells in your battles

• Challenge your friends in friendly battles

• Go to the Builder Base to discover new buildings and characters in a mysterious world.

You must be at least 13 years of age to play this game. A network connection is also required and there are in-app purchases as well.

This is a heavyweight PvP zombie shooting game. Danger lurks everywhere. Fight off the zombies using rifles, grenades, shotguns, and anything in your arsenal to get your self and others to safety.

You also need an encampment away from the zombies.

Battle other players in solo and team multiplayer tournaments. The chopper available in the game can be used to lay waste on enemy bases and steal their resources. You can as well form alliance with other players.

This game is free to play but some features require payment.

This game is cool like the movie. A cyberpunk MMORPG mobile game adapted from the movie Alita: Battle Angel.

This is the official game based on the theatrical film produced by James Cameron and Jon Landau and directed by Robert Rodriguez. You get to experience all the action, emotion, locations, weapons, and characters from the movie

You get to join forces with the heroine Alita, cyborg jacker Hugo and other friends in an effort to stop the power-hungry forces of The Factory.

This game is playable in both PvE and PVP game modes. The narrative of the game is also similar to that of the movie. Besides, the graphics and special effects are stunning.

• Use cyborg upgrades to enhance your characters

• Numerous weapons, gear and cybernetic upgrades to choose from.

• Hunter Warriors are the police and bounty hunters of Iron City and can be hired to assist you in battle.

• Form alliances with other players worldwide.

There you have it, ten of the best survival games for Android you should try out today. Most require Internet connection and some in-app purchases but that is a norm with most high-end games with the best gaming experience. You wouldn’t regret downloading any of these games.