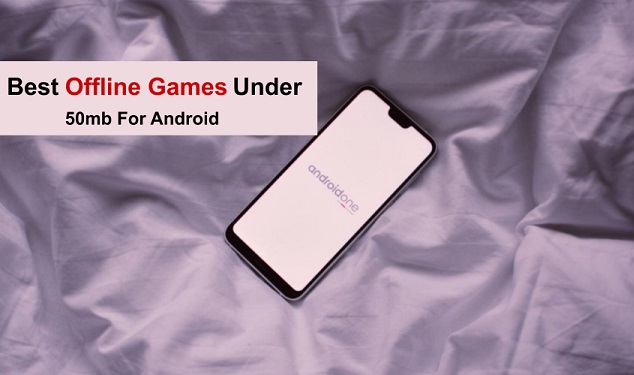 Looking at the trend with which smartphones is growing when it comes to games, I think it is just the perfect time for me to tell you the best offline games under 50MB for Android, which you can always enjoy without worrying about anything.

One of the challenges many game lovers face with android games is the amount of space most of the games take on their phones.

This post will give you the best 12 offline games under 50 MB for android, so you can enjoy decent games on your android device without worrying about memory space, your phone slowing down, or taking forever to download. These games are fantastic games whose graphics will also wow you.

Without taking much time, let’s get into business.

List Of Best Offline Games Under 50MB For Android

This is the first on this list of 12 best offline games under 50MB for android. N.O.V.O Legacy is an awesome 3D Sci-fi game you will love – probably the best of its kinds.

It is a remastered version of Gameloft Near Orbit Vanguard Alliance Butterly, and it’s just 37MB. You can dive yourself to the offline mode where you won’t have to worry about the internet before you play. Bust your stress with this lightweight game as you shoot your enemies in the head.

How long can you stay alive in a city heavily infested with zombies?

You can test that out with Dead in the Box. The game is one of the popular offline games for android that has been enjoyed by many game lovers.

The game features 6 different modes and up to 7 different location around the world. Dead in the box is just the perfect game if you are looking for a first shooter game that is also loaded with an action-packed adventure.

This is a game that is fashioned just like GTA. So if you are the type that loves GTA, this is another great game to try.

You can get your shark anywhere in the ocean. There are no route maps or any rules restricting you but make sure you don’t starve your shark to death.

Discover new things, swim your way through the ocean, eat food, and enjoy your trip in the water.

This is a new classic endless runner RPG you can enjoy on your Android device without an internet connection.

Your mission is to be a hero while you face a difficult task of slaying the queen of goblins and save the villagers already kidnaped by them.

It is a light weight android game that will keep you sitting in a position for hours. Easy to play and you can upgrade your weapons and skills to give you an edge over the army of goblins.

This is a 10md game that has found its way into the heart of a huge number of individuals since its release.

It is a driving simulation game for driving lovers. I personally love the game, and I can hardly go 3 days without getting behind the wheels with it.

It features many real-life experiences. Complete your goals, get a level up and earn more coins to buy yourself a new car. It is also a great racing game whose features will intrigue you.

Big city is a game that also came from the developers of the multi-million game World Derby and Clash of Crime Mad San. But this time, there is a larger city to conquer and show yourself in its glory.

No weapon or shooting is required for you to win the glory. You just need to start way as a simple worker and gradually work your way up the career ladder.

Looking for a game of attention and focus, which will also be lightweight and requires no Wi-Fi to play?

Poly Path is a fantastic android game below 50MB. Challenge your skills in this puzzle game.

Tap the track to change turn as you route the colorful dots to their right color. The game comes with a very clean graphic. Unlock exciting rewards by collecting stars in your missions.

Out of the best 12 offline games under 50MB for android, Minion Shooter is a new fruit gun shooter game recently added to google play store.

Your job is here is to shoot down the bad guys whose desire is to eat the last coffee plant.

At all cost, you have to protect the last coffee plant from the bad guys by using your fruit gun. Be ready to shoot at them from any direction.

Really a fantastic game with a simple concept.

Under 30 MB, the graphics and sound effect of this game will amaze you.

Very simple and interesting – you only need to earn some points by swiping down to break the roof floors. However, be careful with lasers and cops and don’t miss the bathtub to quickly earn some points.

You probably must have played this game before, but you don’t know it’s less than 50MB.

Now you know! Subway surfers are definitely one of the most frequently downloaded games for android.

It is an endless running game where you need to run as much as you can without hitting the various obstacles featured in the game or getting caught by the police. You don’t like the track on which you are running? You can easily customize the graphics of your tracks or choose a new character every month.

Forget the urban cities and get behind the wheel to explore a dangerous world full of blood-thirsty zombies and various challenges.

There are different cars from which you can choose. You love Monster Trucks, or 4×4 off-roaders, or even a six-wheeled gas guzzler.

Do whatever pleases you – complete challenges, explore massive landscapes, smash zombies, or unlock unbelievable locations. Deadly weapons await you as you journey your way in this post-apocalyptic off-road open-world sandbox game!

Your task, as the most precise and most reliable transporter of the future, your task is no less than impossible.

You need to deliver a TOP SECRET package as quickly as you can or else the world with come down crashing.

So, it’s time to jump onto your super motorcycle and put your fabulous driving skills to work. The world awaits their hero!