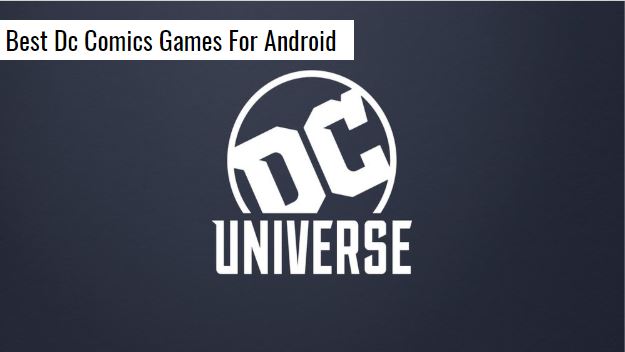 The Best Dc Comics Games For Android available on google play store has one of the best graphics and gameplay you will ever see, especially the very first Dc Comics Game on my list. Dc Comic games, for those that are familiar with Dc Comic magazine, cartoons, movies, and even the superheroes in this cartoons, like Superman, Batman, Wonderwoman, Flash, Green Lantern, Aquaman and the rest of the Superheroes and the Villans also.

List Of The Best Dc Comics Games For Android

This is, without doubt, the best Dc Comics game on my list. You know sometimes we save the best for last but this time around the best comes to you early. Injustice is an amazingly outstanding action game, with all of your favorite superheroes and villains. All you got to do is select them and start fighting.

When you click the download link of this game and begin installing, the installation size of this game is approximate 1.4GB, that is if you are downloading it from google play store. But if you are downloading it from the web, then the Apk file size is 32MB. With this, you can start downloading the game begin playing with your favorite characters. In Injustice, you can fight one-on-one or two-on-two or more. Choose your fighters and step into any Arena and fight. you can create your own team and upgrade them as you progress in the game.

Your basic objective is to eliminate the competitions, conquer every Arena that you step into and level up to other fighters and other Arenas. Every superhero that you will be in control of will have special abilities and powers, so endeavor to use them to your advantage and upgrade their powers and that will increase the intensity of the power attack.

You have a mission if you choose to accept it, assemble a formidable team of all your favorite superheroes and villains, and take the game to the next level with really amazing graphics and smooth gameplay. fight off every team of villains that will be put in front of you, level up and face stronger fighters to keep the fight fun and interesting. The tougher the fight the stronger you get.

Injustice 2 is like Injustice God’s Among us, the graphics are almost the same, the gameplay and even the audio. Almost all the famous superheroes from Dc Comics will be available on this game, the likes of Superman, Batman, Flash, Green Lantern, Wonderwoman and the rest of the amazing superheroes. All you have to do is to select a fighter or group of fighters and then choose an Arena and begin the fight to the top of the mountain.

This game’s installation size is not sure yet, it varies with different Android devices. So be sure to have enough Data o your smartphone before you begin installing.

Dc Legends, right now are battling for supremacy, So if you want to be a part of this battle and probably win and be on top, then you will have to join Dc Legends: Battle For Justice. There is no way out, all you need to do is to fight your way through. There are a lot of superheroes from Dc Comics that are available in this particular Dc Comics Game For Android and in order to use those superheroes to fight your battles, you will need to recruit them to your team.

You can recruit the best of the best out of the list of the thousands of Dc Comics superheroes from heroes like Superman, Batman, Flash, Green Lantern, Wonderwoman and many more to villains like Lex Luthor, Joker and more. You can even put together unfriendly alliances, like Superman and Lex Luthor or Batman and Joker. You can also put a team of Batman and Superman against a team of Joker and Lex Luthor. All these fights are at your fingertips, you can adjust them and set who fights who.

This game is just 67MB in the initial install but will cost a whole lot more afterward, so ensure to have enough Data to begin the installation.

This is one hell of a game, one of the coolest Dc games on my list of Best Dc Comics Games For Android. There are a lot of Arenas to fight in, with powerful superheroes and villains. The fighting never stops ad the fun never ends in this battle of the immortals.

You have amazing graphics, cool gameplay with your heroes, realistic fighting with your super-powered superheroes.  and many more cool features that make this game to be among the list of Best Dc Comics Games For Android. The graphic on the Arena and other visual effects are amazingly outstanding. Nothing but top-notch gaming experience that you’ll get from this game.

You can fight with multiple fighters and build up a group of amazing fighters that have highly effective superpowers and fighting skills. This game is 48MB in the installation size, but like every other Dc Comics games on my list above, the 48MB would be the Apk file size of the game, then when you download that, you will begin to download the additional file that contains the data the game needs to run.

This is an amazing Dc Comics superhero puzzle game. This game is not like every Dc Comics game that you have played, the gameplay is totally different, exercise your brain with puzzling activities with superheroes. Unravel puzzles that hold the identity of your favorite superhero and win.

There are coins to be won and letter to be discovered, so get ready to brainstorm your way through these puzzling Dc game. Now, you didn’t expect all of Dc Comics games to be all action now did you? Of course not, the action and RPG combat gaming experience that you will get from the other games are different from the puzzle experience you will get from these villains vs Superheroes puzzle game.

This game is just 22MB in the installation size, suitable for any Android device with 4.0 Android version and above.

Get ready for some extreme superhero fighting and extreme superpowered combat. Learn new unique skills and a lot of other fun and amazing stunts from different superheroes. You have your famous superheroes and villains in which you can choose from and begin fighting.

Make use of the various fighting environments, the off-road Aena, a ring-like battle Arena, and many others. Now, one very interesting thing about this game is the fact that you don’t only have Dc Comics superheroes involved in this game you also have a collaboration with Marvel, but the game is own by Dc. So from the Marvel corner, you have superheroes like the Hulk coming out, Wolverine, Ironman, and others.

You can have this superhero from Marvel fighting against superheroes from Dc, so you can put together matches like  Hulk vs Superman, Batman vs Ironman, Captain America vs Flash, Shazam vs Wolverine and many others, use your initiative and create never before fights. This game is 49MB.

Batman: Gotham Most Wanted has to call on his guys from Dc to help him fight off the unending crime attacks and killings in Gotham city. The graphics in this game is nothing to be compared with the previous games on my list above, but it’s cool.

There is a list of the most wanted criminals that are plaguing Gotham city as we speak, you need to get ready to stop this forces from taking over and completely winning the fight and gain control over Gotham city for good. Your task might seem impossible, but I know you got what it takes, don’t you soldier. A lot of story pages and cool interactive games. Batman: Gotham’s Most Wanted is centered on Batman, fighting crime, trying to save the world, but as you go deep into the game, your buddies from Dc Comics will turn up to help him and then you can have the upper hand and eliminate darkness wherever it hides.

This game is 94MB in the installation size, so be expecting something cool as you install.

And now, we have come to the end of this article, Dc Comics has a whole lot of superheroes, about a thousand at most. If you watch the cartoon ‘Justice League’ you will see a lot of superheroes that fight alongside the founders of Justice League, guys like Superman, Flash, Batman, Wonderwoman, Green Lantern, The Martian hunter and many others.

So with that said, I want to say a big thank you for always stopping by to view articles from this site, you are very appreciated. For now, I say bye.