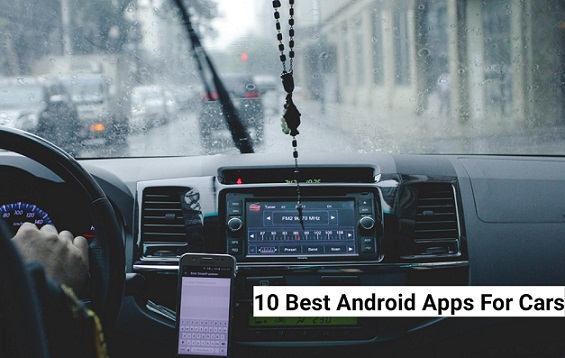 I want you to take a second and two and imagine if you could get Android car apps that have amazing powers and features that seem out of this world.

Well as of now most cars are able to access Android apps which are very useful because you could get direction, use voice commands and lots of other stuff.

Here’s our list of best android car apps below.

Let us get started with this app called drivvo.

With this app you can keep total track of all, basically, everything concerning your car, which includes kinds of stuff like; maintenance, repairs, expenditures, miles driven and also keeps tracks of petrol consumed.

Funny enough this app keeps records of all petrol stations in your city and also store directions.

It also has the ability to backup locations of fuel stations and keeps them in case of loss of data.

This apps is a sure one and also one of the best android car apps although it has a pro version which is not much expensive.

This app is generally one of the best car apps for Android.

This app is also a very smart driving companion, that displays all apps you run on your car dashboard.

You could also use google assistant to answer calls in your car.

Well, you could also use your media apps on your system, Apps like Spotify and other music players. Youtube is an amazing app for streaming video in which all smartphone users are aware of. Well its quite surprising that this app is also one of the best android car apps.

This app was created for fan users for the purpose of getting videos on how to fix their spoilt car art like brakes, tire and more.

You could also make research on old and new cars, probably how to fix the old cars spoilt parts.

This app is a very nice pick as it helps you learn a lot about your car.

Spotify being the fourth app on the list is a music app that is mostly used on Android operating systems.

But due to the advancement in technology, we could also in one way or the other access it on our automobile car.

This app called Spotify is a very nice music player that has millions of music and tons of albums from all kinds of artists.

You could also get the already-made playlist for every mood you find yourself in.

Well, it is to bad that the app has some premium features which include; playing any song offline, no annoying advertisements and also very nice sound quality.

SpotAngels is an android car app developed to help parking much easier for drivers.

From various users, this app is one of the newest android car apps. It has saved a lot of drivers from parking tickets.

This app is not supported in most cities but it is supported in literally 20 cities like; new york, San Francisco etc.

With this app, you could also be a savior to other people by helping to upload pictures of free parking space on the app.

Autozone is another android car app that helps you buy and surf inventory or spare auto parts for your cars.

With this app, you can get whatever you need to your doorstep or any place of your choice as long as it exists on the map.

Well, we have other types of online stores like eBay, Amazon, Ali express and so on.

But I will suggest you stick to this baby, as it gives you all the required materials for your cars.

Car Dashdroid is another app from the developers of the android auto app.

To start with, car dashdroid is an android car app that can serve as a replacement for the custom home dock that comes with some cars.

This super app has lots of features like; Reading out loud SMS and fast reply using voice commands.

Literally, this app has a very nice intuitive music controls for music players like Spotify, SoundCloud, audiomack and so on.

You can also access your recent call logs directly on your car dock screen and also.

The Waze app was developed for the purpose of getting notified of traffic jams and police.

This app shows routes to take in order to get to your destination on time with no traffic problems.

It is also capable of giving you the estimated to reach your destination.

Do you know that you can also pay less for gas with the aid of the Waze app? Well, it is possible as it helps you locate the cheapest gas stations around your area.

With this app, you could also get to use the android auto app and display the Waze app on your car display wirelessly. You will also be guided by a voice prompt from the Waze app, which will guide you to your destination.

Drivemode app makes the use of your smartphone easier while driving.

You could safely access your Android apps from your car dock with the aid of the app. This sweetheart is capable of setting auto-replies for text messages.

It functions with Bluetooth pairing with your smartphone. You can also set this app to auto startup whenever you start driving.

Also, you can get personalized recommendations over time based on your activities, calendar, and favorite places.

It has other cool features like setting up of DND (do not disturb) mode and get to use the google assistant and lots of music apps like Spotify and so on.

Well, this app is very cool as it helps you obey the traffic rules and regulations.

Autovaras app is an app that automatically reminds you of your car documents expiring dates.

It also reminds you to pay your road taxes.

It shows you how long your insurance will last and also gets to remind you when they are about to expire.

We all know what vehicle inspection period is all about, it is surprising that this app also helps to remind you when they will expire.

Finally, we have gotten to the last part of this amazing article. Truth be told, there are other apps out there that can be used to do so many cool things from the comfort of your car. I had to take it upon myself to do some research and write this article on some of the best Android car Apps.

As we will not hesitate to include them in the post.