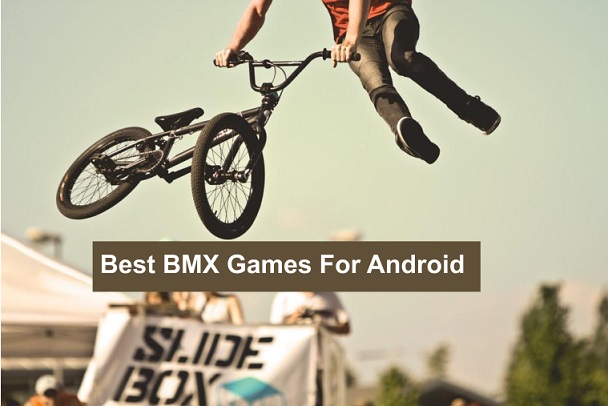 Lovers of off-road sport bicycle games, used for stunts or hallow street racing, would love this list I curated.

Your attention to details, and navigating through mayhem after every checkpoint, will keep you glued to your android device screen.

If you’re not a BMX racer in real life, then become one virtually. You do not need to know how to pedal fast or have great stamina, all you need to be a master in is tilting your device and staying concentrated.

Here’s my list of Best BMX Games For Android

Some fundamentals of physics were considered when designing this game. It features elements of realism and this gives it a much more professional outlook.

There are several riders you can choose from, and customize to your taste. You can make them mirror your personality.

Moreover, there are several hand-crafted tracks, and more are being added every week. This keeps the game in a continuous mode, as more challenges will also be doled out. There are always evil bosses to defeat. Hone your skills to defeat these skillful villains.

Every week there are Jam competitions. You get to compete with friends, people from your state or region, and international players.

This game has some of the most dangerous tracks with tricky layouts, constructed above sea level at 41000 feet. Totally worthy of my list of best BMX games for Android.

There are several obstacles on your way which you need to navigate through. This is where masterful tilting of your device, to get your rider out of harm’s way comes in handy.

Performing stunts add up to your points. The more difficult the stunt, the more points you will get, and the greater chance you might fall off the bike and re-start from the last checkpoint. You need to be smart and careful when stunting. Remember, you’re 41000 feet above sea level. Care must be taking when biking.

You can compete with your friends and prove yourself like a pro. Keep up with their regular release of biking gears and bikes as well. This increases your chances of becoming a pro.

Ride through slopy mountains performing stunts, and keep your bike balanced at all times.

The trails are beautifully designed, but also designed with jagged rocks and roots meant to throw you off balance.

There are timed races and freestyle trick events. Both feature trails inspired by real-life locations.

Make your rider stylish with the various in-game gears. You can also purchase gears not fitted into the app. Your bike can also be upgraded for speed, strength, agility, and energy.

Challenge your friends who are also players of the game, or simply share the result of your race with them, to determine the pro.

This game is available only in the paid version. It was inspired by the popular Tony Hawk game.

To gather points when playing you need to do mind-blowing air tricks and grinds with combos.

You can play in the story mode. The storyline is one of disaster, and you are their only chance of survival. The parks are all in danger of being closed, and only you can save them with mind-blowing stunts.

There are only 7 locations with 22 different level, this is kind of small. But with the 15+ real-world tricks, that covers for the few locations.

The game has an online Facebook achievement and leaderboard. You can also screenshot during replay and show off online.

If kids are playing the game, there is a parental control to turn off blood.

This game is just like a traditional city marathon racing kind of game. You and other players will ride steadily until you reach the finish line.

The graphics are not above par, even though it has some 3D features.

You have to complete a level before another is unlocked.

There are several sport cycles to choose from.

Why this app deserves a spot here is its simplicity. It is very easy to learn and navigate through. Also, it’s the only game where you’re not the only racer and stunts aren’t needed. There are several other players you’re competing with and have to reach the finish line before them. While you don’t have to worry about balance you need to improve your speed.

This game features bikes and scooters. There are 6 bikes and they’re all legendary brands and well designed. There’s just 1 scooter in the game, and it’s just like your normal real-life scooter. But still, you can do crazy stunts with it.

You can design your bikes to your taste. A little touch here and there till you find what soothes you.

The challenges are kind of difficult, especially as you rise in levels. With the accurate control mechanism of the game, you can still be a pro biker.

You can compete with your friends. There are special bonuses for the best racer.

Ride, duck and dodge away from moving vehicles, and obstacles blocking your way. Speed doesn’t matter in this game. Concentration is what you need and taking as many coins as possible.

The game has very colorful graphics. You can also make use of power-ups like hand glider, helicopter, and rocket, to stay out of harm’s way.

There is a weekly leaderboard to compete in. You will need to upgrade your bike and various gears before being able to compete.

While this game is more of an MTB biking game than a BMX biking game, the great graphics, wonderful gameplay, and accurate control mechanism make it worth a mention. Besides, there are also some BMX bike features in the game.

This game is multiplayer, though you can play it as a lone racer, it’s best enjoyed when competing with other players from around the world.

You will race through mountainous pathways with very realistic forests. You can use a map to navigate through the mountains.

There are 4 types of weather and this will affect your race a little bit. You can play from the head camera or biker’s eyes. While one broaden your view, the other limits it but makes you more concentrated.

There are different gaming patterns you will need to get acquainted with, such as pedaling less to reserve energy, following the pathway so as not to fall off and so on. Regularly playing the lone racer mode will get you accustomed with them.

The characters in this game are all created in caricature art.

The game features over 90 beautifully designed tracks, set in different atmospheres. There are also various types of tracks, like the Downhill tracks, Trial tracks, Free ride tracks and so on.

This game has an assortment of bikes such as Bmx bikes, E-bikes, future bikes, rocket bikes, retro bikes and so on. Depending on the challenge, each of these bikes has s purpose.

This game is free in every sense. There are no in-app purchases. For the locked items, you need to finish your challenge to unlocked them.

In this game, you will ride through 3D skate parks. You can customize the parks and create maps for them. You can also customize the character and the bike. Whatever you want to add or omit, this game gives you full liberty to do it.

The game features music from great artists. This helps in calming down your nerve before attempting a stunt, as stated by the developers.

There are three game modes with different challenges to choose from.

Here’s yet another amazing game on my list of Best BMX games for android. This is the final installment from the Pumped BMX series. Pumped BMX 3 is the upgraded version of Pumped BMX 2. There are more bikes, challenges, riders, stunts, and levels too.

Your goal is to pull crazy stunts until you beat the high score.

The game has a whopping 720 challenges, this is by far the most challenging game on this list. There are 60 levels across 6 amazing environments, which is fair enough due to the immense challenges.

The game features 15 of the world’s top dirt jumpers like Chase Hawk, Dennis Enarson and so on. Each of these pro dirt jumpers has a signature bike you can use. You can also customize a bike to suit your taste if you wish to.

This is a next-generation themed game. This is Tramp Bike uses realistic physics during stunts. The game has 360-degree environments, that is adjustable whilst in gameplay. This allows you to check out your styles from different angles.

There are also various environments to try out, such as grassy, park parlor and so on.

You can change each part of your bike to what suits you the most. Also, you can customize your character with various clothing and gears within the game.

There are 32 tricks you can try, and they’re divided into 4 tiers.

BMX games are fast-paced and require a lot of concentration, while this might sound tedious it actually isn’t. The stunts and dodging of obstacles will keep you engrossed in the game till the very end. Additionally, good BMX games allow you to customize your bikes, and characters to mirror whatever design you might have in mind. And the same goes for the games on this list.

I researched several BMX games for Android before settling for this twelve. Now, you can visit the Google play store to install the games on your android device, and become a pro biker.