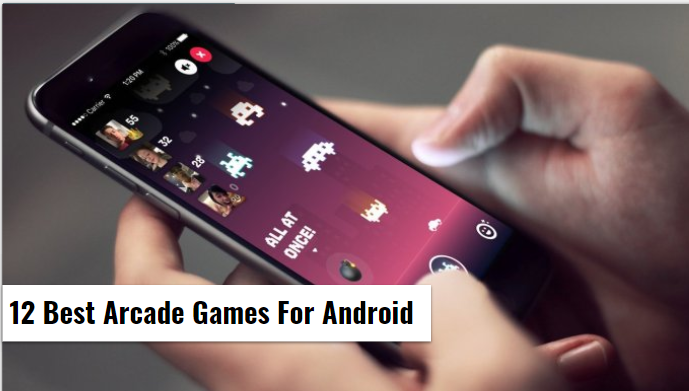 Hello, I’m here to introduce a list of all the latest and Best Arcade Games For Android, suitable for all age grades. Arcade games are very interesting with decent graphics, amazing gameplay, smooth controls, and good sound effects to keep the game fun.

Back in the days, an arcade game was simply coin-operated games, but now you don’t need coins to operate or play an arcade game, all you have to do is take out your Android phones and download them from Google play store or any other effective App store.

Now, this article is not to tell you where you can just get arcade games, but to also help you download the best, the ones that are totally worth the time, Data and energy, and will totally kill boredom once you begin playing.

I will help you make the right selection from the long list of arcade games on Google play store. Stay tuned and get what you need.

Vector 2 is an amazingly fast-paced arcade game in a dystopian world with intense gameplay and realistic animations. Vector 2 has a way of giving you that unusual feeling of getting caught, you will be chased by the guards from a research facility you escaped from, over and over again. The character in this game is being constantly pursued which requires him to be on the run at every point in this game.

Based on the storyline of this game, the character mentioned earlier worked at a research facility. He has been manipulated and controlled by the head of the facility. Now, when he realized what was going on and understood that everything he knew and everything he was told was a lie, he set out to investigate. In the process of doing so, he got caught and took off running.

While running, you might get in front of some obstacles, you will need to scale through them by jumping over or sliding below to pass without been touched or harmed.

Let’s shoot some hoops! in this outstanding basketball arcade game. Simple controls will totally allow you to navigate the ball right through the basketball net, dunk as many times as possible, unlock a new set of beautiful balls in different colors.

Every shot you make is burning hot, tear the net with your hard-hitting dunking technique. This game is downloaded widely by everyone of different race and color, basically, over 10 million downloads have been recorded for this game alone. Download this game and start shooting some hoops, it is just 51mb in installation size.

Regain that nostalgic feeling you used to have while playing the old popular classic console-type 1990’s brick game. This is a legendary game, played by basically everyone that ever knew what classic arcade game was like. And now, you have this old popular classic console-type 1990’s brick game on mobile, so interesting and so fun that you don’t have to wonder about the good old days but simply click the link below and wonder about the game, in the game.

You also have about 10 different themes that you can change from time to time. Play as good as you can and share your best highest scores with your friends and invite them as well to join you in the fun of Brick Game.

Run as fast as you can trying to escape the evil clutches of the inspector and his dog, dodge the trains that will be on your way to victory. Play with really beautiful, vivid graphics and smooth gameplay. Now you won’t be running alone, you have a crew that will run with you, you can switch between which crew member to use for the run. You can also customize the lead crew member, customize his hat, shirt, and so on.

Some added advantage that makes subway surfers interesting, unique is the hoverboard, the head starts, 2x double bonus, which allows you to earn more coins to be able to buy more beautiful looking hoverboards and many more amazing features that I might not have mentioned.

In the end, Subway Surfers is just an all-around outstanding game in my list of Arcade Games For Android, suitable for all age grades.

Angry Birds Space Is mad, with badass gameplay, explore the world of the solar system, control the mirror world and send wingman to rescue your friends for the grasp of the annoying pigs.

There are over 300 levels in just 9 episodes in this game, a whole new list of playable characters, unique and thrilling powers has been accorded to each bird which makes it a whole lot more fun. A particular bird has a particular power that is perfect for some kind of situations, therefore this has made it easy for you to enjoy the game.

Don’t feel bad about not being able to complete some difficult missions, I can assure you, the developers of this game have made it in such a way that you can never get bored. There is something called “daily mission” which allows you to always have a new mission to play whether or not you completed the previous missions.

Get involved in this top-notch air combat shooter Arcade Game For Android. Deliver earth-shattering, groundbreaking missiles from your combat plane and teach your enemies a lesson. Have fun with the amazing classic WW2 Arcade shoot ’em up fashion and show them who is boss. The graphics and combat-active sound effects are simply amazing.

Choose a plane, equip yourself with the necessary bombs and the rest of the weapons of mass destruction you will need because there will be 22 campaign missions, including a survival mission which will seem too difficult to complete. Now for the sound effects, it’s not just the sound of the bomb landing on the ground or the sound of the flamethrowing guns, but this basically means soundtracks, which means there will be a whole lot of tracks that will be played as you battle your enemies, which are 30 in number, willing and ready for the taking.

Choose your favorite plane from the five available planes, you can earn enough money, come back and purchase more planes as well as to upgrade your planes. This game is an offline game, that can be played with a gamepad, just 12mb installation size.

This game is legendary, when it first came out on google play store for mobile, it was as fun and addictive as ever, it still is. Join your friends to play, try and beat their high scores. The story that led up to the character running away from a creature began when he stole a cursed idol from the temple. After such act, he had to escape from the temple, then began the chasing.

You will be running at every point in the game, you will only jump over or slide down through some obstacles. You will also swipe to the left and right of your screen to adjust the character to dodge traps and stones on his path. While running, collect coins and boost your player’s account, so that you can activate the ‘Heads Up’ feature and other power-ups.

Check out this 12 Best Sports Games For Android

The name of this game has already told the story, Jetpack Joyride. Have fun riding through the lab in a bullet-powered cool Jetpack, you can also ride on top of a huge scary mechanical dragon, crushing, destroying everything in its path.

Jetpack Joyride, offers you the chance to fly one of the coolest Jetpacks you will ever see in your life, complete scary, fun missions to boost your pack and rank. Dodge lasers, guide your outgoing and incoming missiles, collect cons, equip your pack with high-level tech gadgets and increase your power-up.

Earn more achievements, and battle against the worst of the worst in every scene. this game is just 96mb in installation size, with optional in-app purchases.

There are a lot of boss battles, upgrade your guns, shields, missiles, big bombs, go to the extreme to rescue civilians and be a hero to all.

Sonic Dash is an amazing endless runner Arcade game with a really dope 3D graphics and cool gameplay. Play as Sonic the Hedgehog, Amy Knuckles, Tails and many more others of Sonic’s friends. Release an amazing special power that will overpower your enemies, conquer new missions and the obstacles in them, you can also customize Sonic to look more colorful.

Earn more coins and points to enable you to activate some certain features in this game. You’ll be required to dodge a lot of roadblocks and magical Badniks, evolve and get on the run with new and improved sprites. Basic controls are very simple and easy to learn, swing from one ring or orb to the other, prove your superiority in this amazing fast-paced Arcade Game For Android.

Break as many bricks as you can, times yourself and work on breaking more bricks in a faster time. Have fun with every mission in Brick Breaker. The graphics are so cool and vivid with a space-like background to make it look like you are breaking the bricks from outer space.

Basically, no network is required to play this game, it is totally free and available only on offline mode. The game also supports any Android devices including Tablets. There are google play leaderboards and achievements to help you keep tabs on your progress even though you exit from the game and stay away for a long time. Once you resume, the leaderboard will sign you right back in and continue from where you stopped.

This game is a complete light-weight download, just 17mb in installation size, with 14 different languages to choose from, based on where you are staying to download this game.

Cruize in a jet-like plane and maneuver the plane to pass through the paths unharmed, the controls are smooth and easy to use so you won’t have trouble avoiding the obstacles that will be blocking your path. Travel as far and fast as you possibly can while collecting gems and making some difficult barrel rolls, just to show off a little bit.

Horizon is a unique brand of Arcade Games For Android with about 100 challenges to collect, 40 ships to collect as well and 25 trails to unlock to keep the fun going. Drive well, gather points, gems and XP  to rank high, so that when you share your scores with friends in other parts of the world, your score will be worth looking at. You can train and keep your ships active by participating in the daily challenge, it is very rewarding.

I hope my list has been able to help you choose which arcade game to download, choosing the perfect Game may be hard though, why? because all the games that I have listed above are fun and amazing.

Okay, here’s the part where I stop writing and bid you farewell.