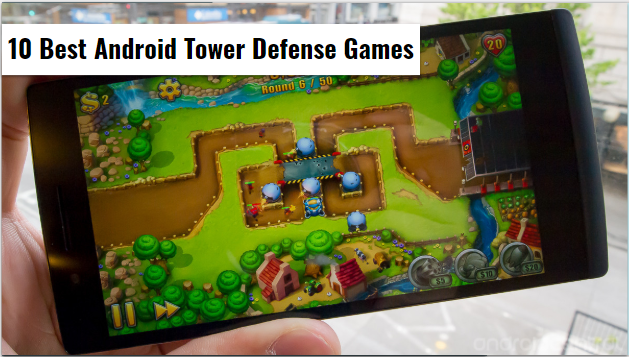 Android Tower Defense Games are all about defending your territory. Dominating your enemy, conquering all oppositions and standing out strong and ready to attack. Though as the name implies, ‘Tower Defense’ your main objective and the main move won’t be to only defend, also to attack and be ready for any attack.

The Best Android Tower Defense Games can be found on my list of Best Android Tower Defense below, totally captivating, very addictive with guaranteed fun. Trust me when I say this, once you start playing games like this, you will not regret trying the games. Games like tower defense games are full of life, action, adventure and even a little puzzle to make things a whole lot interesting.

Reach to your Android devices and get ready to download one of my Best Android Tower Defense Games on my list. The very interesting part about this games is the fact that, I never liked tower defense games until I had to download one since I I’m literally writing an article on it, I had to experience it for myself. Once I was done playing for a few hours, I totally fell in love with the game, haven’t stopped playing since then. I can assure you of the same. Here we go.

This is undoubtedly one of the Best Android Tower Defense Games with a whole lot of action. tower defense games like this particular game are all about defending your kingdom, city, empire or whatever domain you have acquired. Defend your treasures and protect your people from the terror and wrath of your enemies.

There are maps that will guide you throw every path, every attack, successfully deliver ground-breaking attacks to your enemies as a result of the map you have. Use it to know where is where and where your enemies might be hiding.

Build a strong defensive line and defend your territory, that is what these tower defense games are all about. Each level, there will be different waves of attacks from your enemies, and 5 boss stages to pass through. A lot of upgrades and support magically, challenge mode and 12 cool towers and 9 other special defense towers. This game is just 35mb in the installation size.

Become a Tower Defense Legend, defend your empire, don’t let anything come and go without your knowledge. While playing this game, always be vigilant, have eyes at the back of your head if you can. There is basically not much to say about this game. Download it now, simply click on the download link below and begin installing.

There are a few game modes that keep the game interesting, using heavy fast-firing turrets and thick amour, build your towers to protect you from unforeseen threats. Your objective is staying alive, if you die, the game probably ends. You are not only protecting your city from the enemy, but you’re also protecting yourself from the enemy.

Warships are even included in this game, have a game plan, take the initiative to have a couple of tactics that will work in lowering your enemies defenses. This game is absolutely free, 70mb in the installation size.

Now, moving ahead to the features that make this game the delight that engages gamers for hours, playing non-stop. These features are from the 40 maps levels to the endless mode. In each level, there are waves of attack from enemies, In a particular level, you can have up to 31 waves of intense combat, trying to defend your territory and staying alive in the game. Combine your turrets, make it go boom when the enemy thinks they have gotten you surrounded.

2 basic fun modes are what is keeping the action of this game in place, the endless mode where you can fight for hours and hours, bloodshed non-stop until you die eventually. You can also engage in the campaign mode where there will be an interesting storyline, you die or get surrounded at any point in the game will mean that you have to start from the last checkpoint.

When the duty to rid the world of zombies and defend your kingdom from the invasion of zombies falls on you, then you must stop at nothing to eliminate this threat. Raise a tower, upgrade it and equip heavy turrets close to the towers to kill and destroy any opposition.

This might be your very last chance, hope and opportunity to completely get rid of all the zombies that have plagued your kingdom. This 98mb tower defense game has two very intense and extra interesting modes among all other modes. You have the offline campaign mode and the endless mode. In the endless mode, the rules are pretty simple, play until you die and cannot continue in the game any longer. Whereas the campaign mode is like a storyline kinda thing, totally amazing.

Check out this amazing 12 Best Role-playing Games For Android

Back then, when this amazingly outstanding game first came out, you needed to pay to download it, it was a paid game. That goes to show you how dope this game is, but now, it is just 80mb in the installation size. So you have been awarded the priviledge to play this game for free. Download now, and experience real fantasy world tower defense.

Now, like the name Empire Warriors TD Premium, the premium offers you special characters like the hero Miria, 6 runes, 50 VIP only coins and more. This game has an extensive stroyline that is very fascinating and entertaning. Hands down the best on my list of Best Android Tower Defense Games on google play store.

Now, three very important key in succeeding in tower defense games including this particular one is planning or strategizing, building and defending. Defend your base like your life depends on it. In this magical fantasy world, anything is possible so use all the magical.

Some of you must have heard of this game or even come across it while searching for an app on google play store or have this game pop up as an Ads on your browser page as I have. This is one of the most interactive, very fascinating and highly entertaining tower defense game. Not everybody like this game, but trust me, you will enjoy the game once you download and start playing, just 98mb in the installation size, with an impressive number of downloads, 100 million downloads.

Now, for those that already have this game, you might need to click on the download link below to update your current version to the latest version, just a few Mb needed. Upgrade your town hall and your turrets and other machinery to fight back. It is all about who wins the battle in the end. Don’t back down

Clash royale just like clash of clans is just is one of the oldest but totally fun tower defense game on my list of Best Android Tower Defense Games from google play store. play with other players from around the globe and gives a really amazing fantasy real-time tower defense experience.

Earn more chest to unlock cool rewards, destroy every single tower that belongs to your enemy and builds a stronger tower in your own kingdom. The fight never stops and the battle will never end, fight to the death, protect your kingdom at all cost. You are the king and you have the power to summon all your minions to fight for and with you. Lead them to battle and defeat your enemies.

Just 98mb in the installation size and like the previous game, this game has over 100 million downloads so far and still counting. Don’t hesitate, click the download link now and begin.

Some of the tower defense games on my list may require a persistent internet connection, so be sure to check the games that require this and ensure a stable network connection. All the games on my list are very free, no paid game, just a few in-app purchases here and there and a few Ads. Thanks a lot for trying out this games, see ya later!