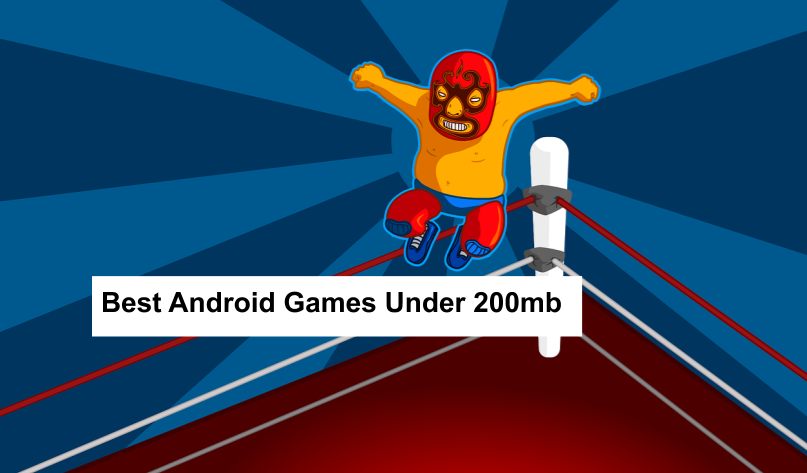 A lot of people are concerned about the size of a game before they download it. The major reason why one would look for the best Android games under 200mb is that they don’t want their phone space to become full.

If you belong to this category of people, don’t worry, I got you covered, in this article I have compiled a list of 10 of the best Android games under 200mb.

None of the games listed above exceed the 200mb limit. They are not boring or dull games, they are fun to play games that will keep you occupied.

Ready for my epic list of best Android games under 200mb? Let’s begin.

The first game on my list of best android games under 200mb is Iron Blade, this game has a size of 53mb, take note that with upcoming updates in the future, this size might differ, but it won’t cross the 200mb mark anytime soon, unless the developers are looking at adding a major upgrade.

Iron Blade is an amazing fighting game where you would have to a lot of enemies, don’t worry, you’d be equipped with amazing powers and weapons that will enable you defeat enemies.

Gods of Rome is another amazing game on my list of best android games under 200mb, this game was developed by the game gods (Gameloft) and has a size of 36MB. Beware however that this is not an offline game, for you to enjoy this game on your Android device, you would need an active internet connection.

I will never get tired of playing Gods of boom, it is one of the best android games under 200mb. In this game, your objective is to team up with teams that will be automatically given to you and try to beat your opponents. You can join clans, and even add people to your own group and be become a force to be reckoned with in the Gods of boom world.

This game has a size of just 113mb, as you can see it is perfect. There are a lot of weapons to choose from, you might have to use real money to purchase items though. But in all, Gods of boom is worthy of being on this list.

Have you seen death race the movie? No, you should. In this game you don’t just drive, you also take down other drivers by ramming their cars or shooting at them. Like the name implies “death race” someone would need to die, you or your opponent.

This game contains ads, but not to worry, I checked, it won’t disturb you while you are playing, but will pop up from time to time on the menu pane. The download size of this game is 30MB, how cool is that.

Here’s another game worthy to be on my list of best android games below 200mb, the best part is that this game is an offline game that can be played even when your internet connection is turned off. Your task in this game is to take down a bunch of terrorist. It won’t be easy, but with the amazing weaponry, you’ll be able to do it.

The download size of this game is 63MB and it already has over 100k installs on Google Play Store and a lot of positive reviews. There are 3 game modes to choose from so you don’t have a boring time.

Here’s one game that you would find on the phones of a lot of people, it is a great way to kill time, if you are not into shooting or car racing games, you can try this word game for android. It is below 200mb and will not require any additional installation after download the apk file from playstore.

In this game, all you need to do is find words from the five or more letters that will be given to you. If you want a challenging game that will make your brain work, here’s one.

Here’s another pick on my list of best android games below 200mb, Light-it up is one of the best and most addictive games I have ever played. You’ll love everything about this game, from the many levels to the lighting effects.

Light-it up is just 61mb in file size, but there is a tendency that this size might increase in the future, but I am not sure it will exceed 200mb. This game has over 10million downloads from Play Store and a lot of positive reviews too, you’ll love it.

I am a boy and I would love to include a lot of shooting and action games on this list, but they are girls who play games too. This one’s for you “my lovelies” This game is below 200mb, and it is fun. I tried playing it, although I didn’t like it at first, I got to like it later.

They are up to 1000 different levels to complete in this game, you can upgrade your kitchen interior and appliances. Although this game offers in-app purchases and shows ads, I think it is an amazing game that the girls would love.

Here’s another game on my list of best android games below 200mb that will keep you glued to your Android screen for hours, this game is very addictive. You will be given two images per level, the task in this game is to spot the difference in both images, after spotting the differences, you will progress to the next step.

The size of this game is 91Mb and there are over 750 levels to play, don’t think all levels are easy to play, I was stuck in level 50 for a very long time. This game is suitable for adults and kids.

The last game on my list of best android games below 200mb is Ninja Warrior, this game has all shades of amazing. It is below 200mb in size but the graphics is amazingly outstanding. The only down side is that it has a limited number of levels. Up till this moment I am still waiting for the developers to add more levels.

Another thing to love about this game is are the soothing sounds that come with easy level. As for controls, it is very easy to master.

Thanks for stopping by, stayed tuned for more updates on the best Android games and Apps for Android.