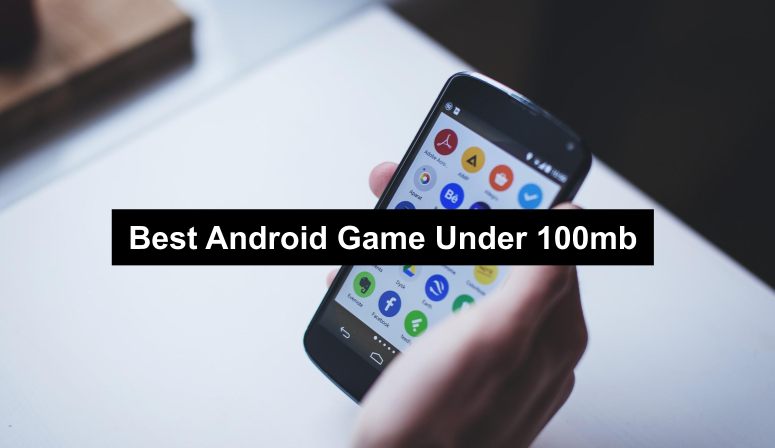 I love playing Android games, as a game freak, you’d realize that even your Game Console might not be enough.

Android games are fun to play, in this article, I have taken time to research for and list 10 of the best Android games under 100mb.

All the games that are listed in this article aren’t just under 100mb, they are also fun games. I am too kind to include boring games. *smiles*

Ready for the list? Brace yourselves, it is going to be one hell of a ride.

The game on my list of best Android games under 100mb is Battle Royale: FPS Shooter, fortnite playes might love this one. This game is a shooting game, it might not give you graphics as good as fornite, but it is actually worth downloading. I played this game, and I must say, it’s days on my phone will be longer than expected.

There are over 30 types of weapons to choose from this game, it also has my favorite auto shooting mode, with this mode, you won’t need to repeatedly hit the shoot button, just aim and it will shoot automatically.

8 ball pool is yet another exciting game to play on my list of best Android games under 100mb, this game has been downloaded by a lot of people who are currently battling it out with themselves for stars and coins. 8 ball pool an amazing game but I must warn you, it is addictive.

There are a lot of boards to play from, also a lot of tournaments have been made available. Unlike other pool games, this one doesn’t take much time to match you up with players from around the world.

Lately this game’s ad has been everywhere, it is an addictive game too. Head Ball 2 has a size of 94mb, this might increase sometime in the future with more updates and features possibly rolling in. In this game, you are required to control your character and defeat your opponent in a 1v1 head ball match.

You won’t be playing with A.I, this game will connect you to real players like yourself from all around the world. As you play, you can upgrade your character and stand a better chance at winning opponents.

This particular game brings back a lot of sweet memories, if you have ever played this game with your friends as a child, then you had one of best memories. This game has an offline and online multiplayer game mode, the gameplay of soccer stars is easy and fun.

I like the world cup mode, in this mode you are going to play against a lot of opponents, and if you are good enough, you would come victorious (Like I did). The size of this game is 56Mb.

Here’s another game on my list of best Android games under 100mb, this game takes to a future where mankind has gone extinct, I know right? Scary, but it’s actually a fun game. There are a lot of puzzles to solve. This game is a great adventure game under 100mb.

Before downloading this game, make sure your Android touchscreen is functioning well, if is it, get some headphones, connect it to your device and enjoy the thrilling adventure and wonderful soundtracks that come with this game.

Okay, here’s another game on my list of 100mb games for Android, this particular game won’t only give you an exciting adventure, it will also make you laugh. The visuals of this adventure game is lovely, the graphics is in 2D. You might not get the jokes in this game if you do not have a good sense of humor.

After playing for a while, you might need to buy the full game, the size of this game is 81mb on Google Play Store. If you own a pad or tablet, this game would work perfectly on it.

I bet I could beat you, yes you, in a game of checkers any time, any day. Dare to challenge me? This game has the smallest size this is because the game is minimal in graphics. The best part about this particular game is that it has different rules. How? Different countries have their rules while playing checkers, this game has over 10 different country rules.

Download this game today and thank me later, it is overly lightweight and fun to play, it does not have an online multiplayer mode but you can play with friends using the offline mode.

Have you seen my list of best bike games for android? You should totally check it out. Bike Race is a free bike racing game that deserves to be on my list of best android game under 100mb 2021. This game has a lot of crazy roads that will almost make you go “WOW”.

This game contains ads however, but not to worry, it won’t pop-up while you are trying to perform a stunt with your bike. There are also in-app purchases in this game, if you want to upgrade your bike, you’ll need to use coins to purchase parts.

This amazing game has been around for a long time, 3D tennis gives you a somewhat realistic scenario like a real tennis court would give you. The controls are easy to use and satisfying, the player movements is amazing, they are a lot of courts to choose from. You might have to purchase tennis courts from the app.

Meet the last but not the least on my list of best android games under 100mb, Ninja Flip is an exciting and challenging game for Android gamers. There are a lot of missions that will keep you glued to your Android device. In this game, your task is to perform spectacular stunts and tricks.

The graphics of this game is cool, I played it and I enjoyed every bit of it. The size of this Ninja game on Google Play Store is 35mb, as you can see it is under 100mb. Download Ninja Flip and thank me later.

All the apps listed in this article are below 100mb on Android. Most of the games listed above may contain ads and in-app purchases. I hope this list of best android games below 100mb has been of great use to you.

If you have a favorite game that isn’t above 100mb, tell me about it in the comment section and I would include it to my list of 100mb games for android. Thanks for stopping by, I’d be very happy if you could share this article with your friends.