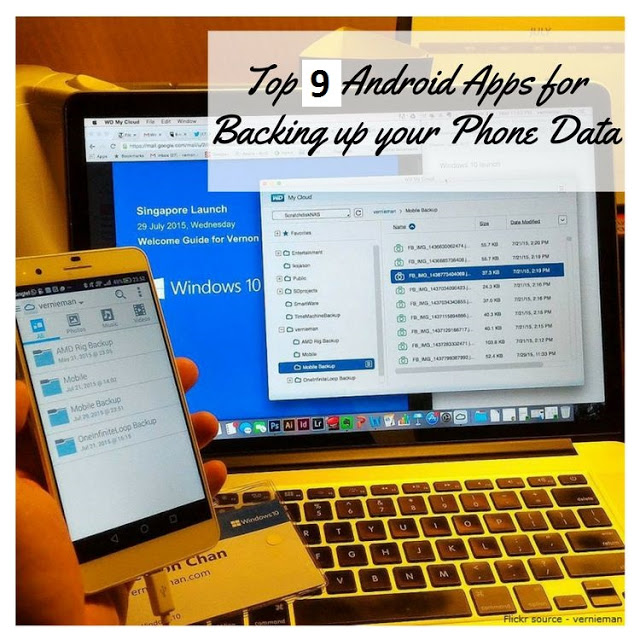 Android backup Apps play a vital role in helping to retrieve files in case of any mishap, this post will briefly talk about the best Android backup apps.

Many Smartphone users don’t keep any backup for their phone and for some? it feels like a worthless chore for them.

But what will you do after the disaster of losing all your important files, Have you ever thought about it?

Let’s say in an event of your smartphone being stolen or maybe you install a bad ROM, You’d agree with me that having a means to recover your Android data like (images, songs, videos, Apps and a few others) is very essential.

I previously saw an article somewhere, the author said ”Backups are getting crucial these days and many desktop users always have few options for backing up”,

You may be thinking, What about Smartphone users?

Well, as you would already know, Our smartphones being one of our most useful gadget, contains a lot of precious data just like PCs and there is always a chance of it crashing and becoming worthless any time.

We can’t really know when things will go wrong with our smartphones and I know you won’t want to lose any of your stuff in the event of something going wrong.

After digging for Android backup apps, I have put up a list that I know you will love;

Remember the popular Clean Master app? it is the most popular speed boosting and cleanup utility app for android devices.

Well, The CM app developers aren’t just into the cleaning business, they are also into the backing up business. The CM backup app gives users peace of mind and provides easy backing up of your precious data.

The CM Android backup app offers users 5 GB of free cloud storage on the secure servers, thus users can easily restore their data from the cloud storage with only a single tap.

Users can get some extra space on cloud storage through premium subscriptions provided by this app.

It does not backup applications but it is great for backing up some really important stuff.

This Cool Android backup app includes a web address, with this, users can easily view and manage their backups on their PC.

One thing that makes me love the CM Android backup app is its user-friendliness. Users can easily import their important data to their new or recently upgraded phone.

Helium is also one of the best recommended apps for backing up Android phone data.

It functions greatly and provides users peace of mind and easy backup with a few taps. The best part of this app is that it does not need any root permission for backing up data on the android devices.

Helium as an Android backup needs a premium subscription of just $4.99 for syncing apps between your android devices and backup/restore from the cloud storage options like Google Drive, Dropbox or OneDrive.

Here’s another sweetheart in the Android backup apps list;

Cloud storage is also a fantastic Android backup app tool for android devices. Users can use this tool for documents and important files backup.

G-cloud storage provides an easy and safe way of backup for Android devices. With G-cloud you can backup your entire music files from the free Google Play Music with just a few taps.

Cloud storage makes backup very handy and users just have to select what they want to be backed up from their checklist, this app does the whole work automatically.

This Android Backup app is quite helpful for transferring data to different devices and also helps in extending your storage after saving any stuff in the cloud.

The Titanium Android Backup app is another reliable tool for android backups, having the free version allow users to backup their important data.

Although the app requires root permission to work? It does a great job of backing up data like call logs, SMS, and contacts with the ease.

Going for its premium version won’t be a bad idea, it provides lots of powerful features including cloud restoring and cloud backups.

Titanium Android Backup app allows users to automate their backup schedules and provide an option of backing up data and moving them to an SD card.

The features of this app are truly identical with its name.

For me? Of all Android backup apps, this seems to be the easiest to use.

It provides users multiple options and platform back up, thus users can create backups to Google drive, SD card, Dropbox, and OneDrive. Restoring the backups from these locations is quite easy afterward.

Easy Backup will need root permissions for some features like batch restoring app and app data.

You can also try this reliable tool that can be used to backup android data;

Well, could this be true? You just have to find out yourself! (smiles)

The extraordinary functionality and user-friendly interface makes it very easy to use. It functions greatly and allows users to backup stuff individually.

The Super Backup app also belongs to the category of Android backup Apps that can backup easily to the Google Drive;

But hey, that’s not all, you can also backup your stuff to internal storage, desktop, or SDcard;

If your device is rooted, you can use the automated scheduled backups. The Super Backup provides all its functionality free.

Many of the tools for android backup are quite complex in nature and does not deliver an easy user interface. The complexion makes backup a difficult task for the new users.

truBackup can only backup your apps not the app data, so if you have good scores in android games you won’t be able to restore it.

Users can schedule their backups with the data restoration feature and this is manageable through this app.

Syncios does not support app or app data backup but it covers almost all the crucial data for backing up.

Call logs, SMS, and a few other important data can be easily back up with this tool and I think this is enough for android smartphone users.

As a dedicated Android user, most times you might mistakenly delete treasured files like photos, videos and other files.

The Dumpster tool is built for Android and is almost identical to the desktop’s recycle bin and it’s functionality.

Deleted files and even uninstalled apps are sent to this tool. Dumpster functions to remove old files automatically after a certain time period.

There is also an option that lets users to empty old files into the Dumpster’s cloud, allowing online backups.

Thus, if you have lost your precious photos or videos they can be recovered using the Dumpster tool.

Smartphones are the world’s most useful gadgets in this world of user’s friendly devices with its ease of access and extraordinary features. So it’s common to lose important data on your smartphone these days.

You might find a lot of options for Android backup on the Google Playstore and it can be overwhelming.

Finding a quick and effective solution for backup can be quite difficult. I hope this list of Top 9 Android backup Apps helps.