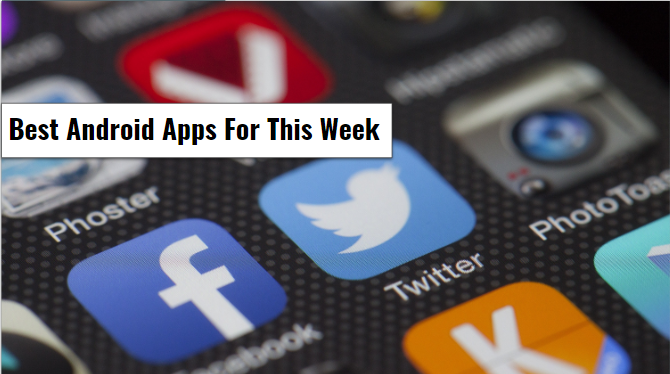 7 Best Android Apps For You This Week ~ Android Weekly!

7 Best Android Apps For You This Week ~ Android Weekly!

Best Android Apps For You This Week

So, the Best Android Apps For This Week comes at the end of an amazing fun-filled week, or maybe your week was not that much fun, either way, I got some Android apps that can help lighten your mode. Amazing Android app, totally free and very addictive, you definitely want to try out the apps on my list.

My list of all the Best Android Apps For This Week, basically the most used apps on my list will get you wanting more, but I just got 7 for you, not too much, that is why I narrowed my list to 7, they are literally the best for this week and totally the best you will ever get.

List Of The Best Android Apps For This Week

Calendar Widget By Home Agenda is a complete set of cool calendar widgets that can be used on your Android device’s home screen. You can have a clear view of basically a whole lot of things, the past events and the present future.

In addition, you can add other options to your proceedings as well as the weather. With cool themes and good home screen setup, this app should work just fine. Colors can also be added to customize events on the calendar app, fortunately, this app synchronizes with Google calendar, with Google reminder and some other Google features too.

Playground: Childish Gambino is totally an AR app mainly for devices that have the ARCore. This app works well with Google’s Playground new app to also pop Donald Glover ( Which is also known as Childish Gambino)  right into all your photos and other selfies.

The reviews for this app are really positive and the app did very well during testing. Although, we cannot just focus on the fact that you need a device with an ARCore and you also need the regular Playground app installed before this works. In any case, it’s a neat little AR photo app, especially for Donald Glover fans

Clip Cloud is a simple app with a simple premise. It lets you sync your clipboard between your PC or Mac with your Android devices. You can copy from one platform and paste into another. It uses a Google Chrome plugin along with this app to get the job done. Some other features include AES encryption, a maximum clipboard length of 2,000 characters, and more. This is usually a feature of a much larger PC to Android sync app like Pushbullet or AirDroid. However, those who just want the clipboard feature can try this. It has some bugs, but it should stabilize over time if the developer continues to work on it

Sound Amplifier and Live Transcribe are two new apps from Google for deaf people. Sound Amplifier changes, boosts, or reduces the sounds your phone makes through a wired headphone connection for easier hearing for the hearing impaired. It only works on wired headphones, though, and not Bluetooth. The big story, though, is Live Transcribe. It uses Google’s voice recognition to write down the words people say so that deaf people can understand what people are saying. It supports over 70 languages with quick bilingual support. It also does a fairly good job of transcribing deaf people when they talk out loud. Like we said, Live Transcribe is the bigger story her

Check Out The Top 10 Best Compass Apps For Android

Widget Screensaver is another Android customization app. It lets you create a screensaver with the widgets already on your device. Thus, you can transform an old device into an alarm clock with a clock widget, weather widget, and maybe a flashlight widget for quick viewing in the dark or something like that. Some other features include a classic bounce mode where widgets move around the screen and also a burn-in prevention feature for you folks with OLED screens. It’s an extremely niche app, but it works pretty well. There may be a bug or two, though, because it is brand new

Newton Mail is one of the most powerful email apps on Android. It disappeared for a while, was purchased by Essential (the phone maker), and brought back to life. The app features instant push notifications for all types of mail, read receipts, a send later feature, email snooze mode, and a large number of direct app integrations for apps like Evernote, Todoist, OneNote, Pocket, Trello, Asana, and others. Of course, features like that come with a hefty price tag and Newton Mail certainly has that. We only recommend this to people who basically live in their inboxes. However, that said, it is one of our favorites

App Tiles is a niche app with a very specific purpose. It lets you put any app in your Quick Settings as a tile. Some apps, like Google Keep Notes, have this functionality already. However, most apps don’t and this app lets you have that power. You simply open the app, select the apps you want in your Quick Settings tiles, go to your quick settings, hit edit, and add the tiles where you want. You can even have them in your quick toggles if you put it in the right spot. The app is free to use with advertising. The ads only show in the actual app and never in your notification area so that’s good news. This is a good customization app.

Best Android Apps For This Week

Android App developers have come up with amazing cool new Android apps that will totally get you speechless, my list above has basically been the best that google play store has to offer, the Best Android Apps For This Week with totally 100 percent authenticity and works perfectly without any glitch.

So, for this week, update your Android device’s app drawer with new amazing Android Apps, you can uninstall the old ones that you really don’t use and install any of the Best Android Apps For This Wek on my list. Thanks so much for your time checking out this article, as always, it’s a pleasure for us to give you the best. Till next time, for now, see ya!