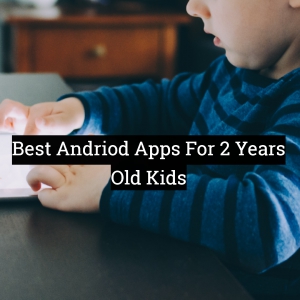 Hello, In this article, I’ll be listing out the best android apps for 2 year olds.

Early childhood is an important time in a person’s life. They’re learning all kinds of things, Some parents opt to let their kids use their smartphone or tablet for recreational activity, That’s perfectly fine.

But you have to be careful of the kind of apps you allow your kids to use.

ABC Kids is an easy and simple app that helps teach kids their ABC.

Here is how it works. Kids trace the letter and the app tells them what the letter is.

It also includes a matching game along with capital letters and lowercase letters.

There are also plenty of colorful animals and environments that’ll hopefully help keep your kids entertained. The app will even work in such a way that it doesn’t allow the child to exit the app.

It’s a completely free app that shouldn’t have any advertisements or in-app purchases.

GunjanApp Studios is a developer on Google Play.

They have several apps for toddlers that you can download and check out.

None of them stand out as a clear best, but they’re all fairly solid overall.

The apps include a vocabulary app that teaches words, an alphabet app that helps with the alphabet, and there are others for shapes, colors, animal sounds, and more.

All of the apps have a free version to check out and a few of them have paid version to get rid of things like ads.

Nursery Rhymes and Kids Games is one of the best apps for toddlers.

It features a ton of digital content for your kids.

There are nursery rhymes, songs, stories, games, and other content specifically made for toddlers.

Along with all the stuff, the app is totally interactive and lets your kids tap on stuff on the screen to make them do fun little things.

Instead of just focusing on learning, it also includes a lot of other things to stimulate other senses.

For instance, the app vibrates when your kids do stuff in the game.

It also has gyroscope support, This makes the app respond when your kids twirl and move your phone around.

There’s a bunch of stuff to do in the app and it should be fun for many kids.

You can pick it up for free to check it out and you can buy the pro version for $1.99

Kids Doodle is another drawing app that is aimed at toddlers.

It’s a simple app that lets your kids draw all kinds of stuff.

It’s very colorful and you can choose the background color of your canvas. That means you can do colors on a black background or on a white one.

It’s a free app, and also one of the best android apps for 2 year olds that have been specifically Picked out by google play store for every kid below 2 years.

However, there are some ads and no pro version to get rid of them.

Sounds for Toddlers is an app that, you guessed it, play sounds for your kids.

It features a total of 65 different things across five categories.

That includes animal sounds, vehicle sounds, tools, and instruments. There are a total of 250 different sounds.

That’s not half bad for a free app that includes no in-app purchases or advertising.

It also features easy controls so your kids can quickly learn how to use it.

Besides making sounds, it doesn’t do much else.

However, it is free so it’s worth checking out.

Funny Food Games for Toddlers is a collection of games.

The games have an educational premise to also help your toddler learn.

There is a matching game to help memory, learning what different foods are called, shapes, puzzles, and even some light logic games.

All in all, it has 17 different games, ten educational concepts, and you can play the game offline.

It does come with ads but you can buy the full version to get rid of them.

Some reviewers have commented that it’s a bit simple for older toddlers, but everyone is different so it’s worth a shot.

First Words for Baby is a vocabulary app to help toddlers learn how to talk better. It features simple navigation that should work well for adults and kids.

Additionally, it contains the pronunciations for over 120 words spanned across 11 categories.

Each word is accompanied by an image. It should keep your child entertained for a while. The free version of the app does come with advertisements.

The ads aren’t great, but it does let you check out the app before paying for it.

It’s not bad overall, YOU SHOULD TRY IT OUT.

Drawing for Kids is a fun little drawing and coloring app.

It includes a mode where kids can trace various animals.

It includes 30 things for your kids to trace and color.

There are also a bunch of fun animations and sound effects that should help keep your kids engaged.

It’s a great way to inspire some creativity in your little one.

It’s also a free app that doesn’t have advertising or in-app purchases.

Additionally, the developers (Bini Bambini) have several other very top best android apps for 2 year olds that are worth checking out.

App Family is a publisher on Google Play.

Most of their games are simple, fun, and even a little bit educational.

They almost all feature simple mechanics. Nothing requires more than a few taps or swipes to get right.

Some of them are jigsaw puzzle style games while others are just regular puzzle games.

They all have free versions with optional pro versions available as in-app purchases.

The Endless Alphabet is another interactive kids game from originator Inc. It’s aimed at teaching the alphabet to your kid as well as how to read and write.

This app is purely educative rather than competitive and thus does not have high scores or game over.

The app will patiently teach your kid the alphabet through several words puzzles for free and many more in the paid version.

There is no time limit for completing tasks in the game and you will have all the time and motivation they need to ace every level on their own.

However not be ideal for younger toddlers who cannot tell what the alphabet is and may only work for preschool nerds who are ready to begin the alphabet.

The idea of Fruit Ninja is simple: fruits appear on the screen, and you have to cut them in half with your finger.

But be careful, you have to avoid touching the bombs.

This game will entertain children for hours and can also be a good way to feel the interest in fruit and get used to eating.

This application is suitable for children in the pre-school stage (2 years).

Kids Numbers and Math will allow children to name the numbers, learn to count and compare numbers, in addition to basic operations of addition and subtraction.

There is a little likeness of God in every kid evident in love for creating stuff.

This app will allow you kid to explore this part of their brains by creating a virtual world to their own with trees and pools as well as mountains.

This virtual world is in many ways similar to our real world and therefore this game will nurture the talent and passion for creating things forming the foundations for future careers in engineering and design.

This game will develop your kid’s creativity and imagination and ability to take responsibility for their actions as they create to ensure that their animals do not go hungry.

Your little one will love this Xylophone app.

When first used, your toddlers and babies may not be able to correctly touch the bells with his/her little hand.

Use the Toddlers Xylophone apps with your baby continuously for a few hours or days, and you will be surprised at the mobile development of your baby’s hands.

Toddlers Xylophone apps must be used in the presence of a mother or father, and it is encouraged for you to guide your baby through the game for a few days at first.

This app is exceptionally handy for mothers and fathers who spend time with their babies but cannot figure out how to spend that time usefully.

This game may be too advanced for infants under 6 months old.

If we missed any app that you think should have been included on our list of best for 2 year olds. You can suggest to us via the comment section.