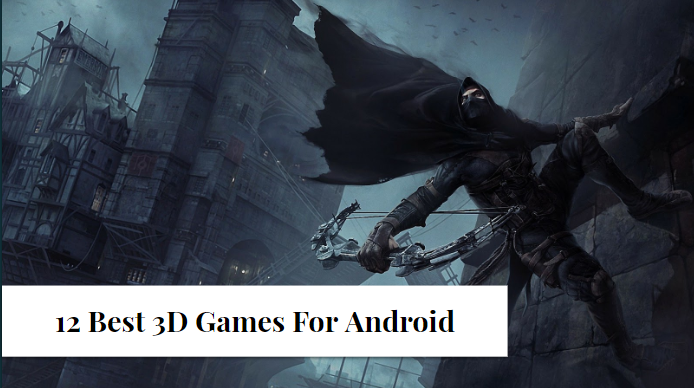 The Best 3D Games For Android comes in such a fascinating creative fashion that totally keeps you glued to your Android device without blinking for a minute.

Best 3D Games For Android consist of action, puzzle, sports, adventure, board, arcade, racing games, and the list goes on and on.

Hence, on my list below you are not only going to play action power-packed games but also fun, educative, fast racing, and simulation games as well, so be ready to see all categories of games from the esteemed google play store.

Tennis 3d is an amazingly legit tennis game trending on google play store as the most popular tennis game in the sports category. The controls are so simple, easy to learn, and understand, game-play is just perfect, really gives you complete control over the ball and its direction.

Improve and develop your speed, response time, and accuracy in the quick play mode before you try out the world tour so that you will be playing in the world tour like a pro.

There are several countries available on the world tour mode. This game is merely 13mb installation size on google play store with an astonishing 50 million+ downloads already.

When it comes to pool games, 3d pool ball is my everyday pool favorite. It has cool 3D graphics and a decent visual representation of what a pool table and the game-play should look like and just in case the 3d is a little bit too much for you, 3d pool ball also has a 2D view mode to keep things interesting.

Okay, gamers and lovers of wrestling, Wrestling Revolution 3D is an amazing 3D game with one the best 3dgraphics and game-play on google play store with over 50 million installs already, I don’t see any 3d game stopping this game from ranking high.

You have a large array of characters and wrestlers to choose from and also a career mode that allows you to customize and personalize your very own character.

Choose your favorite wrestling fictional name and personalize your character, play in the career mode and be drafted to different shows, make a name for yourself there and win as many championship belts as you can and if you are lucky enough you can get an offer from another wrestling show to compete there.

Check out this amazing 12 Best Train Simulator Games For Android

when it comes to City Racing 3D, you are in for a race of a lifetime with realistic racing graphics and realistic car damage graphics.

Take on real cars and complete real tracks, finish first, and unlock more cars. You can earn enough money to buy supercars so that you never lose a race and also customize your cars to have the look your desire.

You are blessed with a lot of race modes, featuring time trials, elimination tournaments, 1-on-1, and career modes. This game was last updated to have no crashes on June 30, 2018, so the game is in good shape, download, and begin your fast driving City Racing experience.

This game has a jaw-dropping 100 million+ downloads on google play store, which is to show you how highly valued the game is on the play store and not to mention the outstanding ultra 3d graphics with realistic gameplay, really fun action-packed missions.

Alright, now how the game works is very simple to learn, the controls are easy and adaptive, you have a lot of lethal weapons from guns to bombs and so on. Now with those guns and bombs in your possession, you can shoot down helicopters, kill zombies as well as other human enemies. I really appreciate the slow-motion feature where you get to shoot enemies in slow motion, watch the bullet as they come out of the gun, and the graphics as the bullets hit its target.

Amazing realistic 3d graphics, smooth controls and fantastic gameplay, this is one of the top 2018 3d games of all time of my Best 3D Games For Android. Take a dive into the world of some brutal mixed martial art brawl and enjoy the full fighting experience.

Amazing PvP battleground, fighting against real players in a brutal 3 0n 3 combat with tons of fighters on your roster. Select the very best and get into the arena where champions fight. Build up your power, perform special attacks, and combos by tapping on the combo button as fast as you can.

You are tasked with challenging emergency rescue missions and delivery missions. Start the plane, lift it off the ground after driving it on the runway for a while, complete all your mission, and safely land the plane where you will be asked to land.

Race against time in challenging obstacle courses in the air. You can also download this game for just a 50mb installation size.

Powerful destructive 3D helicopters available in different sizes with different weapons and guns installed in them, choose the most destructive and power-packed helicopter to strike at your enemies. You have a long line of popular helicopters to choose from ranging from military to war helicopters.

Controls may start out to be a little bit complicated but will eventually get easy once you have gotten used to the game. The gameplay is top-notch, an active 40 level battle game.

Best 3D Games For Android presents an innovative extreme BMX racing game in Bike Racing 3D. Compete with and race against time through a whole lot of dangerous tracks and prove you are the best in this game. You have a career mode with about 60 tracks available for you to drive in.

If you are a fan of bike racing then this game with a really realistic 3Dgraphics is what I will recommend for you. Trial mode or Tutorials will be featured in this game so that you would get what the controls of the game are all about, but mind you the controls are still quite hard and complicated, but the more you play the game the more you’ll get better in its controls.

Despite the 3Dgraphics and amazing gameplay, the developers of this game still made the size a little low and affordable for all on google play store, which makes it only 14mb installation size.

Race in different cars and complete all the missions, drive-in two-way modes or one-way modes, race against time, race in a career mode to earn money to get other good looking cars and keep racing. Race like your career depends on it.

I am just impressed by the realistic car sound, and 3d street animations and other realistic graphics like the fact you can see the driver’s hand while in an in-car view that also shows you the car’s dashboard and helps you keep track of the car’s speed and all.

Start your car by pushing the start button on the screen, all other on-screen buttons will be highlighted, like the acceleration and brake button, change camera icon will be displayed at the top of the screen, fasten your seatbelt and get ready to experience an amazing racing in the city.

Zombie Roadkill 3D is currently the most popular zombie game on google play store with over 10 million downloads, it is a fantastic 3D graphics game, with nothing but the best heavy-duty vehicles at your disposal. The very first car will be free, but you will need to kill as many zombies as you can to unlock and buy other heavy zombie-killing cars.

Choose between the story mode which is very interesting and more fun than the endless mode. In the endless mode, you are going to be driving the truck or whatever vehicle you use through a road crawling with zombies, the zombies will get on your vehicle in an attempt to tip it over, you have to shoot them off the vehicle and keep driving. Do that for as long as you can to score more points and a cash reward.

Punch Boxing 3D has an outstanding real person graphics and really well-set gameplay. All you have to do is punch your way to the top of the tournament. First, choose your fighter from the list of fighters that will be made available to you and customize him.

Now you can only access the customization option and customize your character if and when you must have won a lot of matches and have enough money to unlock, the hair, gloves, even tattoos, and more.

I also want to thank you, my viewers, for your steadfastness and support, thanks a lot, I really appreciate. I don’t think there is any person that does not like or fancy 3D games, the size is usually not small which makes it affordable. And in addition, the games above have 50 million+ downloads.