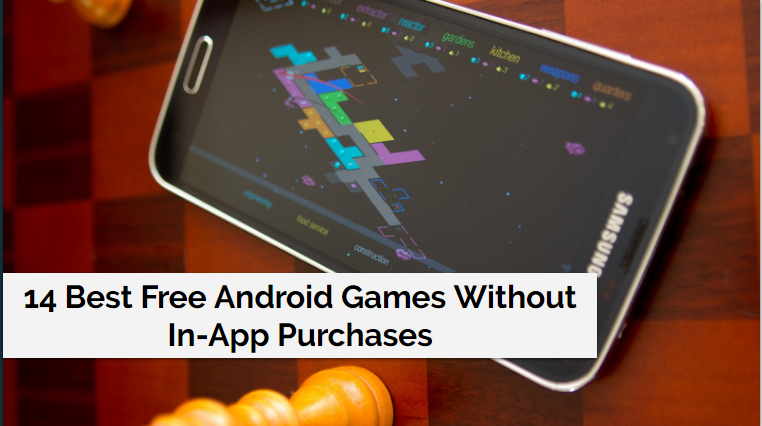 Alright gamers,  I am here to answer the question that has been on your minds, “Are there Android games without in app purchases”?

On my list of Best Android Games Without In App Purchases, there are tons of exciting games on google play store that can be played without in-app purchases.

Just sit back and relax as I take you through this ride, showing you the best free games.

List Of Best Android Games Without In App Purchases

So, the first game on my list of best Android games without In-App purchases is Fighting Tiger. This game is an active power-packed fighting game. You will be playing the role of Gin, the major fighter and your objective are simply to fight your way out of the gang you’re in and in the process gotta rescue your girlfriend.

Note this, you won’t be in a one-on-one brawl, but you’ll be in a fight with more than one opponent at once. There will be weapons available, just laying there on the ground, waiting for you to pick it up and fight back at your opponents. But regardless, there are various moves at your disposal, which you can master and use to defend yourself from incoming attacks.

This is by far, for chess players out there one of the best puzzle game with no in-app purchase, although it has a few Ads here and there.

This is a board game created for 2 players. This game is played on a square board with smaller squares (64 in number) the squares are in default black and white. The color of the squares can be changed to other available board colors in the options menu.

Now this game is what I am talking about, decent graphics, cool gameplay and you’re not the hero or actor or the good guy. You’re the bad guy, cool right?

Players have been afforded the ability to summon over 100 creatures, use powerful traps and spells and also construct 9 dungeons. In your dungeons, you can adjust the depth and add as many minions and monsters at your disposal.

This game is an amazing elimination match-3 game. This game is played by millions all over the world, exercising their brain in exploring the world of Fruit Candy. You have over 1,500 levels to play and enormous challenges to pass.

This game is an awesome candy puzzle game, suitable for both adults and children from all languages and countries. If you’re ever bored, this game is just perfect for you, use it to kill boredom. Sweet Fruit Candy is rated 4.5 on google play store with over a thousand downloads. The game just contains a few Ads with no In-App Purchase.

CrossCraze is a really fulfilling Crossword game amongst all other related puzzle games. The game has an absolutely stunning graphics and a whole lot of options. CrossCraze brings you to a wordplay world to a whole different level.

CrossCraze is a single-player wordplay mode that allows you to select an opponent to test your own skills. The game has no in-app purchases, no irritating Ads, dope graphics, and wonderful effects. The game contains 4 million+ words with a good vocabulary.

Hop on your motorcycle, start the engine and get ready because Extreme Winter is about to get extreme, where everywhere is covered in ice. Don’t forget to wear your gloves and helmet.

This fast-speed ATV challenge game is really cool with the challenges and tricks in the game that has never been done before. The graphics of this game is something to talk about, pretty amazing with wonderful sounds and tracks.

This is a classical deluxe version, an astonishing bubble shooting buster game that has both the Arcade and Puzzle mode in one.

This game is very easy to play, all you have to do is ignore the arrows at the bottom of the screen, simply tap on your game board on your screen and choose where you intend the ball to be. To level up in this game kindly combine 3 or more of your bubbles so that they will burst.

Also, in addition, your bubbles will gradually descend, so you need to shoot as fast as possible to stay alive. The puzzle mode has up to 300 amazing levels to shoot all the bubbles you can.

This is a free, no in-app purchase rhythmic game. This game offers a couple of tracks and decent control, with great visuals.

I’m glad there is a rhythmic game feature on my list of best android games without in-app purchases. You have a lot of tracks to play and over 100 hundred songs to download and play.

Install the songs in the game and begin playing. Very beautifully created with unique song porting ability. Following the instructions in the game, you simply play by swiping and tapping on the screen when necessary.

Following the previous game on my list of best android games without in-app purchases, this is also a rhythmic element game. Also the latest geometry dash in the series amongst all others.

For those out there who are usually strict and skeptical when it comes to playing games on their Android device, this game is for you.

I was a bit skeptical about including this game on my list of Android Games Without In-App Purchases. Jigsaw Puzzle features decent visuals, good controls, a lot of unique and little-complicated jigsaw puzzles, amazing pictures, and the puzzle. Every achievement completed attracts a bonus reward.

This game is quite okay, no in-app purchase, just a few Ads and it’s compatible with any Android device. This game is completely free and enjoyable, you can play this game wherever and whenever you want.

I’m really surprised at this game, it’s a fun, deep, action-packed game that is totally free. A dope game such as this shouldn’t be this free. The game has a few Ads but no in-app purchases.

decent graphics suitable for all screen types and inches. This is also an RPG action game with really simple mechanics.

Check Out: 13 Best Paid Android Games Totally Worth Your Money