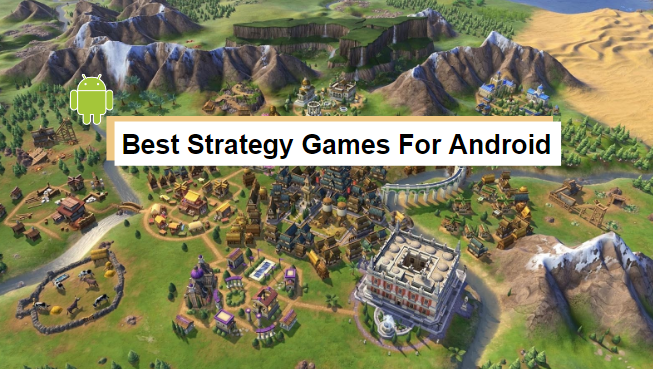 Hey there, are you ready for the best strategy games for android that I’m about to introduce to you?

What are the strategy games? they are games that require strategic and tactical thinking with a high amount of experienced situational awareness when playing.

These games are not board games like chess, but war games with players taking the narrative to make decisions on attacks and defense strategies.

This is one of the best PvP strategy games with epic fighting graphics and amazing sound to go with the video.

This is an online game, with thousands of players scrambling to be the best, to reach the top, and conquer all other armies that will rise up to challenge them.

Get engaged in the campaign mode and fight to victory.

The armies, the terrains, the heroes that will join your army, the build-up strategy list, and more. You can’t ask for a better strategy game than this right here.

Build your defenses, stand strong, and fight against anyone who dares to take over your territory. There are lots of upgrades, building upgrades, city upgrades, and the rest.

March your armies to victory in this challenging strategy game for Android. I believe you’ve heard of Gameloft, yeah! they are the makers of this incredible strategy game.

You ain’t seen nothing yet, brace yourself, you are about to get knocked out by how amazing this game is. Claim your empire, rule on the seat of power, and coordinate your soldiers to war.

Become the champion and strategize how to remain in power, because they are forces that will try to bring you down.

Fight for the sake of freedom. Stand your ground and strategize on how to conquer your enemies. If you’re not a fan of strategy games for android, this won’t be easy at all, but with the time you will get the hang of it.

Get your super-soldiers, engage in serious fighting, and be the captain, to make a difference in your squad of willing soldiers. This game is full of amazing graphics and it even goes for less MB than other games.

This strategy game is totally free to play, in fact, so addictive that you can be caught playing this game for hours without stopping.

You can compete online with other players and see who is the best. Enjoy the single-player mode, and attack your enemies or defend your territory from all attacks as well.

Form strong alliances with others that have the same interest as you in this war. Design your army to be just the way you want it and attack.

Get your weapons of war ready to be deployed and give the order as you will be playing as the commander in charge of all the armies and military personnel.

With cool graphics, strategic game-play, and good sound, you can’t get tired of this game on your phone.

There are some games that you just don’t delete or uninstall from your device, this is one of them.

Hey, there are dragons here too, can you believe that? dragons! When I first saw this I was like, that’s more like it, but now I’m thinking it’s going to get tougher than ever. So, that’s what you have to look out for here.

Engage in their good hero system feature, where you can choose a hero that will fight for you. Of course, you will have to purchase those heroes, because the price for the battle ain’t cheap.

Take this game to another level with strategic build-up. Build your kingdom and rule your subjects with your soldiers doing your biding.

Build a powerful game god to conquer cities and claim territories for you. That’s what this game is all about. This game is total my free.

When you download this game, you are going to build a city for starters, then proceed to get a god to rule over that city. Then upgrade your god to be stronger and as powerful as those Greek gods you hear about in movies.

You can play online and join alliances with other gods to conquer more powerful cities that would require an extra hand. Voila! you’re the king of the hill now, why ain’t you smiling?

This is a really cool strategy game that will wow you, with a lot of entertaining gaming experience, better graphics and smooth game play.

There a lot of units, buildings, and cities to take over. At some point I thought this game doesn’t have an end, guess what? I still think it doesn’t.

IThis isn’t your regular strategy games for android. Claim several rewards, get germs, and boosters to empower your army to fight with everything they have.

Gear up soldier, prepare your armies to invade, the time is now! That’s what you’ll sound like playing this game.

As the commander in charge of the whole operation, you’re tasked with the duty of winning anytime war comes knocking on your door.

There are regular, but necessary updates that comes up from time to time, to upgrade your soldier and fighting plan, allow the game take it’s course and you will be glad you did so.

Seeing this game reminds me of the movie, the Avengers ‘age of ultron’.

So, like the movie, you have an unlimited number of soldiers at your disposal, as the commander in charge, it’s your duty to lead your team to victory.

Your basic task is to create a unique strategy that will work and enable you fight, win, and get spoils from the battle.

That’s a wrap on my list of best strategy games for Android 2021. All the games listed in this article have amazing graphics that you are probably going to like.

I’d love to hear from you, where you able to pick a favorite strategy game? Or do you have an all time best strategy game that I didn’t include? Use the comments section to get back to me.